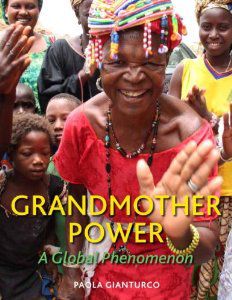 This is a wonderful book full of dazzling and powerful photos!  But it is more than a “coffeetable book.” Grandmother Power is a potent collection of  beautifully-written, sensitive stories — accompanied by stunningly fine images. It will make you weep; make you dance, even humble you.

With this book author Paola Gianturco shows readers the intimate side of what she has dubbed “grandmother power.” In it, she identifies a new, international activist grandmother movement and features the stories of activist grandmothers worldwide who are fighting courageously and effectively to create a better future for grandchildren everywhere.

Gianturco’s 5th book, this is no small undertaking. It features 120 women in 17 grandmother groups in 15 countries on five continents who are working to make the world a better place for grandchildren everywhere.  Few of the women speak English, so beyond identifying the stories, traveling the world to gather and shoot the stories, the author also acknowledges that she worked with an army of experts, including interpreters and fact-checkers, in order to pull together this stunning package,

With dazzling visuals and powerful narrative, Gianturco’s profiles demonstrate that today\’s grandmothers — younger, healthier, better educated, and better off than grandmothers have ever been — have been quietly launching a new international grandmother\’s movement.

These women are not sitting quietly by the fireside knitting baby blankets, today’s grandmothers are:

A grandmother herself, Gianturco is also doing her part: One hundred percent of her book sale royalties are earmarked for the Grandmothers to Grandmothers Campaign of the Stephen Lewis Foundation, which benefits grandmothers in 15 African countries who are caring for AIDS orphans.

Treat yourself or a grandmother friend to this book and do your part to grow the “Grandmother Power” movement. You\’ll find yourself moved to take your own action once you’ve experienced these stories and images.