Want to Bake Something Irish This Week? How About Irish Soda Bread? (Actually, It\’s Called “Spotted Dog” in Ireland)

Want to Bake Something Irish This Week? How About Irish Soda Bread? (Actually It\’s Called “Spotted Dog” in Ireland)

By Pat Sinclair
NABBW’s Associate on Cooking for Two 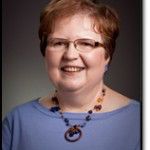 I don\’t have to go back very far to find my Irish heritage as both of my maternal grandparents were Irish. Every year for St. Patrick\’s Day I bake Irish Soda Bread. Though a word about the name: Just as the French don\’t make French Toast — they call it “Pain Perdu,” (or “lost bread,”) so the Irish don\’t call this delightful quick bread Irish Soda Bread. To them, it\’s called “Spotted Dog.”

Why? As far as I can tell the whimsical name refers to the spotting of raisins on the bread\’s surface.

But regardless what we call it, this is an old-fashioned loaf that stands the test of time. And the addition of an egg and a little sugar, give this bread a darker, crisper crust.

I suggest serving Irish Soda Bread with some good cheddar. Its slight sweetness is the perfect counterpoint to a sharp and tangy cheese. But it\’s great with  butter and jam too!

Tradition tells us that in a time when Ireland was more agrarian,  this was a snack typically made by farmer\’s wives and transported to the fields wrapped in a tea towel and served whiskey-filled with hot sweetened tea. 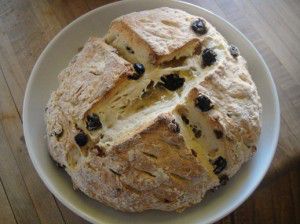 True or not, I don\’t know. But I do know this is an easy bread to make, as there\’s no yeast involved, and it doesn\’t require much kneading. In fact, it\’s important not to knead too vigorously, or the bread will be tough.

Place dough on a lightly floured work surface. Knead dough gently 8 to 10 times or until dough comes together and is no longer sticky.

Divide dough in half and shape each half into a round loaf, about 7 inches across. Place on baking sheet. Slash an “X” into the top of the loaf — not too deep, but enough so that the loaf cracks open a bit. Bake 30 to 35 minutes or until deep golden brown and no longer moist on the surface. Cool on wire cooling rack a few minutes before slicing. Makes 2 loaves.

Tip: This year I added sunflower nuts instead of raisins, using 1/3 cup. 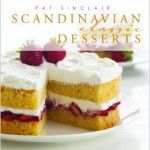 Pat Sinclair, NABBW’s “Cooking for Two” Associate,  is a food consultant with more than  25 years experience in test kitchens and recipe development. Her newest cookbook, “Scandinavian Classic Desserts” was recently published by Pelican Publishing. She is also the author of “Scandinavian Classic Baking“ and “Baking Basics and Beyond,”  which received the Baking Cookbook Award for 2007 by the Cordon d’Or Gold Ribbon Award International Annual Cookbooks and Culinary Arts Program. She has worked for corporate clients Land O\’Lakes, Pillsbury and General Mills. Pat is currently working on her next cookbook, “Dinner for Two.”  She lives in the Twin Cities where she also teaches cooking classes. Pat invites you to contact her on her website, PatCooksandBakes.com, or via her blog.