Thursday - February 9, 2023
Home » Expert Columns » Love, Sex and Dating » Male Menopause & Irritable Male Syndrome » The Black Dog of Depression: Is There a His and Her Breed?

The Black Dog of Depression: Is There a His and Her Breed?

The Black Dog of Depression: Is There a His and Her Breed?
By Jed Diamond, Ph.D., LCSW
NABBW’s Expert on Male Menopause & Irritable Male Syndrome

Read this article if:

“Make your own recovery the first priority in your life.” Robin Norwood

Depression is a term which is bandied about far too often, but it is a serious condition which causes untold suffering.  But men and women seem to ‘carry’ the symptoms in a different way.  Jed Diamond is carrying out research to understand the differences between the ways men and women experience  depression, and here he explains some of his initial thoughts.

The “Black Dog” was Winston Churchill’s name for his depression, and as is true with all metaphors, it speaks volumes. The nickname implies both familiarity and an attempt at mastery.  Those of us who have suffered from depression know well how it can sink its fangs into us when least expect.  As we live with it and become familiar with the ways of depression, it can also seem like an old friend, hard to live with, but never-the-less, a friend.

Both my wife and I have had to come to terms with the Black Dog in our lives.  Yet her Dog and mine often act very differently.  My Black Dog is often irritable and angry.  Hers is more likely to be preoccupied and obsessive. 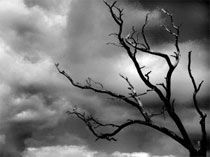 What we call depression has likely been around before recorded history and has been recognized for thousands of years.  Aretaeus of Cappadocia (circa 81-138 AD) is credited with the first clinical description of depression.  Hippocrates, the Greek physician of antiquity, was well aware of the disease of depression and called it melancholia.

Although there are many physical symptoms, depression is considered a disorder of mood.  It is also called an affective disorder to signify that one of the key aspects is a disturbance of emotions or feelings.  Almost 20% of adults will have a mood disorder requiring treatment during their lifetime, and about 8% of adults will have a major depressive disorder during their lives.  Depression is the leading cause of disability and premature death among people aged 18 to 44 years, and it is expected to be the second leading cause of disability for people of all ages by 2020.

The term depression describes a spectrum of mood disturbance ranging from mild to severe and from transient to persistent.  The diagnosis depends on the presence of two cardinal symptoms:

However, I believe that many men and women experience depression in different ways.

When I would become depressed, I didn’t really have a persistent “low mood” as much as I had an angry and irritable mood.  I felt “pissy” all the time and frustrated.  It seemed like nothing would go right for me and I was angry.  Usually my anger was “acted out” and directed at someone else.  Often it was my wife.  This externalizing of pain, is characteristic of many men.

Two men who came out directly and discussed their depression are Bill Maruyama and Patrick McCathern.

Dr. Ron Kessler, a professor of health care policy at Harvard, describes depression in men this way. “When you study depression among children, they don’t talk about being sad, they talk about being angry and irritable,” he said. “Children don’t have the cognitive capacity to make sense of all their feelings. There’s a great similarity between children and men. Men get irritable; women get sad.”

When my wife would get depressed she would seem distracted and sad.  When I’d ask her what was going on, she would describe a myriad of thoughts that would be going through her head.  I couldn’t believe how much she chewed on real and imagined shortcomings.  She would go over and over ways she felt she had not been a good mother or wife or daughter.  Although she is multi-talented and good at what she does, she would become preoccupied with all the ways she would fall short of her goals.

Where most people would look at her many talents as an asset, when she became depressed she would see them as inadequacies.  She believed that she hadn’t done anything important and had only skimmed the surface of her potential.

Psychologist Susan Nolen-Hoeksema interviewed 1,328 adults (631 males, 697 females) ages 25–75.  Participants were asked how depressed they felt, and what they found themselves doing when their mood was low. Specifically, they were given a test to measure their tendency to “ruminate,” or stew about how bad they felt and what they were doing to deserve to feel this bad.  Participants also were asked about problems they had experienced as a result of alcohol dependence or abuse, including losing a job or an important relationship. In addition, they were asked about the extent to which they drank to cope with negative feelings, to help themselves feel better and to deal with stress.

When Depressed, Women Think Too Much, Men Drink Too Much (But Not Always)

Nolen-Hoeksema found that while women tend to over-think and ruminate when they are depressed, men tend to “act out” their pain.  They often drink to escape their feelings of hopelessness and helplessness.  “But some men are ruminators and some women drink to cope,” she adds, “and for both men and women, rumination and drinking to cope are related.” In other words, people who do one are at increased risk of doing the other.

While alcohol may temporarily do an effective job of dampening rumination for men, Nolen-Hoeksema suggests that it seems to fuel rumination in women. Instead of quelling women’s worries, using alcohol to cope with distress just gives them one more thing to worry about, she speculates.

The Depressed Brain in Men and Women:  The Experiment That Made Me Go WOW!

One of the most interesting and intriguing experiments on gender differences in depression was conducted by J. Douglas Bremner, M.D., director of mental health research at the Atlanta Veterans Administration Medical Center and author of the book, Does Stress Damage the Brain? He gathered a group of former depression patients.  With their permission, he gave them a beverage that was spiked with an amino acid that blocks the brain’s ability to absorb serotonin, the neurotransmitter that allows us to feel upbeat and happy.

What I found fascinating were the gender specific differences in the way men and women reacted to the potion that blocked the effects of the serotonin.

If you’ve been depressed what has been your pattern?

If you’ve lived with someone who has been depressed, how did they express their depression?  I’m currently conducting research to better understand the differences between the ways men and women experience depression.  If you’d like to participate or would like more information about this important area of gender-specific medicine, drop me a note at Jed@MenAlive.com

Jed Diamond is the author of Male Menopause and The Irritable Male Syndrome.
www.MenAlive.com and www.TheIrritableMale.com.

Jed Diamond, Ph.D. has been a health-care professional for the last 45 years.  He is the author of 9 books, including Looking for Love in All the Wrong Places, Male Menopause, The Irritable Male Syndrome, and Mr. Mean:  Saving Your Relationship from the Irritable Male Syndrome . He offers counseling to men, women, and couples in his office in California or by phone with people throughout the U.S. and around the world.  To receive a Free E-book on Men’s Health and a free subscription to Jed’s e-newsletter go to www.MenAlive.com.  If you enjoy my articles, please subscribe.  I write to everyone who joins my Scribd team.