Outside of the state of Texas, Cincinnati, Ohio is the most chili-crazed city in the United States. In fact, the community prides itself on being a true chili capital, boasting more than 180 chili parlors, proudly serving “Cincy Chili.”

In recent years, Cincinnati-style chili has developed a cult-like popularity. If you\’re not familiar with it, the first thing you need to know is that it is very different from its more familiar Texas cousin. The people of Cincinnati enjoy their chili spooned over freshly made pasta and topped with a combination of chopped onions, shredded Cheddar cheese, refried beans or kidney beans, and crushed oyster crackers.

The main differences between Texas and Cincy chili come in the way the meat is seasoned – and the way the dish is served: Cincy chili has a thinner consistency and boasts an unusual blend of spices that includes cinnamon, chocolate or cocoa, allspice, and Worcestershire. And, it\’s generally served over spaghetti!

Midwest foodies tell us that Macedonian immigrant Tom Kiradjieff created Cincinnati chili in 1922. There. he and his brother John owned a small Greek restaurant, the Empress. The restaurant really did not distinguish itself until Kiradjieff started offering a chili he concocted with distinctive Middle East seasonings, which he served five ways. He called this dish “spaghetti chili.”

Today, if you visit a Cincy chili parlor and ask for “the works,” you are eating Five-Way Chili. Make sure to pile on the toppings – that\’s what sets it apart from any other chili dish.

Cincinnati chili lovers order their chili by number. Two-, Three-, Four-, or Five-Way. When you serve it at home, you\’ll want to let your guests create their own final product. If they ask, be prepared to explain the “official” differences:

Wherever you live, chili is the perfect winter supper and an easy way to feed a crowd or just two. Whether your guests decide on eating their chili 2-way, 3-way, 4-way or 5-way you\’ll be offering them a hearty meal.

No matter which version they choose, oyster crackers are the traditional accompaniment to this hearty meal. You won\’t need to add the Kiradjieff\’s traditional side of hot dogs to assure that none of your guests go hungry! 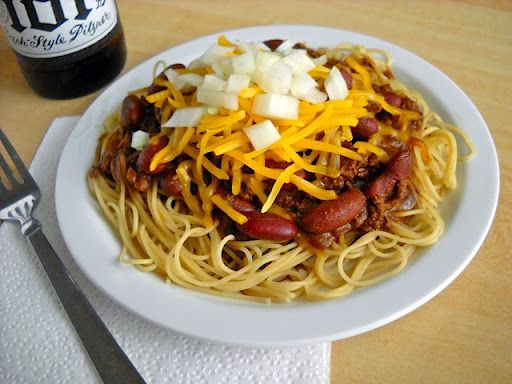 Combine remaining spices in a small bowl. Stir into beef mixture. Heat chili to a boil over medium high heat. Reduce heat to low; simmer 30 minutes, stirring occasionally. Chili can be prepared ahead and refrigerated until serving.

To serve Cincinnati style, serve with spaghetti, and the toppings choice: Be sure to offer lots of cheddar cheese, since traditional Cincy chili is served with enough cheese on top to hide everything else!

SIDEBAR: For four servings of 5-way chili you will need the following accompaniments:

Note: When I make 2 servings, I freeze the remaining chili for another two meals. Reduce the toppings if you are only preparing for two.

Pat Sinclair is the author of Baking Basics and Beyond (Surrey books, 2006) which won the Cordon d’Or- Gold Ribbon Award from the Culinary Arts Academy.
Scandinavian Classic Baking, her new cookbook, will be published by Pelican Publishing in 2011. She lives in Minneapolis where she also teaches cooking classes. Pat invites you to contact her at www.PatCooksandBakes.com or via her blog.
Copyright 2011 By Pat Sinclair.