Wednesday - February 1, 2023
Home » Reviews » The Cowgirl Jumped Over the Moon

The Cowgirl Jumped Over the Moon

The Cowgirl Jumped Over the Moon
Author: Linda Ballou
http://LindaBallouAuthor.com
Reviewed by: Anne Holmes for the NABBW 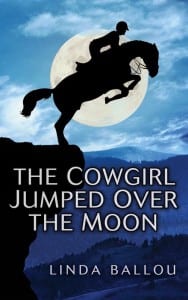 As this book opens, life seems pretty good for Gemcie McCauley, a talented and dedicated Grand Prix jumper. She and her beautiful horse, an Irish Hunter named Marshal, whom she’s raised from a colt, are about to capture the World Cup.

Gemcie and her handsome husband Jorge, live on a horse ranch owned by his parents. Billy, her longtime trainer, is a father figure for her.

She’s never known her father Tom, a cowboy, who left when she was just a month old. We learn that Gemcie was raised by her loving mother, Sue Ellen, the proverbial waitress with a heart of gold, who worked long hours in order to afford riding lessons and all the attendant expenses related to participation in a life of horse racing, the “sport of kings.”

But that’s just the story’s setup. By the beginning of Chapter Two, a nasty fall has stolen Gemcie’s chances for the top prize in the Grand Prix, and left her hospitalized, and nearly paralyzed, with a herniated disc. Gemcie refuses surgery, determined to heal naturally. Sadly, her arch rival seizes this time to start riding Marshal, and to seduce Jorge.

Confused and dazed by her new circumstances, Gemcie manages to heal enough to head for the high Sierras hoping the majestic spires that are rumored to have captured her father’s heart will provide her with answers, too.

She finds strength and solace riding solo on the John Muir Trail, accompanied only by her horse, a pack mule, and a dog, but a bear attack ends her time of introspection and places her in the care of Brady, a solitary cowboy whose work is manning a fire lookout.

If you’re not familiar with manned fire lookouts, these are stations that were built on high ridges and mountain peaks, to watch for forest fires. Extremely remote, the lookout crews – a vanishing breed these days – live at the stations.

Brady gives her a place to stay while she and her horse heal from the bear attack, shows her love and gives her the courage to get back in the competitive jumping saddle. Eventually, haunted by images of Marshal being abused by his owners, Gemcie returns to rescue and ride him again.

But you’ll have to read the book to learn how that happens. (And whether or not sparks fly between Gemcie and Brady… As well as what happens to Blue, the bear whose “bedroom,” she and her horse stumbled into, which is what led Blue to attack her.)

Linda Ballou tells me the first draft of this book was written twenty years ago, when she was recovering from an injury that left her with extreme sciatic pain and forced her to give away her beloved mare and leave the riding world until she was healed. The story wraps together threads of many of the things Ballou loves: all things horse, the environment, and adventure travel.

Ballou’s love of the environment is clearly evident in the descriptive prose she employs throughout the book… Her environmental voice is heard not just in her descriptions of the physical beauty of the land Gemcie rides through, but also in the way she has Brady speak of the battle that rages for us all: How do we share the planet gracefully with the inhabitants of the natural world? How do we preserve the bears, the mountain lions, the coyotes – in fact, the whole conservation heritage that was once epitomized by the fire lookouts and their dedicated watchers? 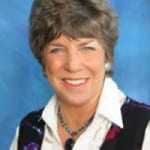 Linda Ballou, NABBW’s Adventure Travel Associate, says her character Billy is based on a real horse trainer, Jimmy Williams, famous for his unconventional training techniques, whom she met in the early 90s.  At that time, Susie Hutchison, his prize protege, was the American Grand Prix Association Rider of the Year. Gemcie, according to Ballou, is a romanticized version of Susie, who now owns a ranch in Temecula, where she is a top trainer herself.

Meanwhile, Ballou, who still loves to ride, says her mission is to experience as many beautiful places on our planet as she can, before they are no more. Travel tales relating her experiences while kayaking, horseback riding, sailing, birding and hiking about the globe have appeared in numerous national magazines, as well as here at NABBW.com.