Stuck in the Passing Lane

Stuck in the Passing Lane: A Memoir
Author: Jed Ringel
Reviewed for the NABBW by: Anne Holmes 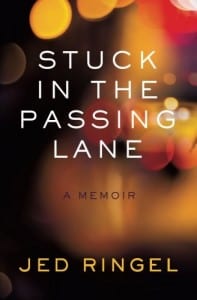 I’ve not read a book like this before. It’s the memoir of a recently divorced (the divorce actually takes place partway through the narrative) upper class Baby Boomer man, who, as he puts it, has become “trapped on the Internet dating superhighway.”

His Amazon.com bio tells us that “In prior lives, Jed Ringel has been an Ivy League drop-out, a failed sculptor, a morally impoverished Wall Street lawyer (seeking salvation in chasing fallen dictators to repatriate what they stole), and the founder of an IT company the sale of which allowed him to retire.

“He’s also a long-time mentor to a child now aging out of the foster care system, and an avid cook, hiker and gardener who splits his time between Montauk and New York City where parts of the story take place.”

Other parts of the story take place in China and Russia, as Ringel takes us along as he willingly traverses the globe, looking for what he hopes will be his last great love.

This is in many ways a neurotic, train-wreck of a tale, almost seeming at times like a plot for a Woody Allen movie. But it’s also a book you can randomly pick up, knowing that with just about any chapter, you’ll find some amusement.

Ringel seems to possess plenty of money, so the venues and the people you meet along the way are wide-ranging and generally fascinating.

I was just as amused by his story of his first date in Russia, with a woman the entire hotel staff was convinced was a hooker, as I was by the story of his trip to Singapore in order to to re-establish a relationship developed during his earlier “Asian phase.” Since the book ends at that point, it’s hard to know if Ringel has yet found lasting love.

I’m thinking he might have, however, because in a food oriented blog post written in May of this year, he notes that he and his “significant other” live “on the edge of Chinatown which is full of little places where they do a few things really well really cheaply.”

I’m happy for him, assuming that’s the situation. Early on in the book he talks about how he’s been trying to use all the dating tools developed during his 23-yer marriage, to “to conduct live experiments on his newly-divorced, Baby Boomer heart.”

Though I’m a woman, I know what he means. I have often opined that if something were to happen to my current almost 30-year marriage, I would have absolutely no desire to re-enter the dating field. And yet, just as importantly, I would not want to end my life alone.

So what’s a Boomer to do? Jump into the dating pool, I guess, as Ringel does, and hope you can swim. Or at least tread water…

Tagged: Jed RingelNABBWStuck in the Passing Lane: A Memoir