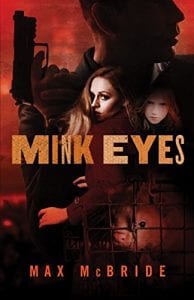 The time is the mid-80’s. October 1986, to be precise. As the book opens, we meet Peter O’Keefe – described to the reader as being taller than 6 feet, and a physically scarred and emotionally battered, divorced, Vietnam vet – and his daughter Kelly. It’s just after 5 A.M., as O’Keefe, who lives in the lower level apartment of a Victorian house, in a regentrifying neighborhood, wakes up, climbs out of bed, dresses and begins his usual, punishing, hour-long physical workout. A former Marine, we’re told his does this routine daily — except when he’s too hung-over.
Kelly soon awakens, and the two of them quickly and happily leave the apartment for breakfast at one of the few local restaurants open his early, a place called The French Bakery. It quickly becomes clear that Kelly adores her father, even though he often has to cancel plans to be with her, due to the demands of his work. (He’s a P.I., and a van stakeout is just not a place for a child.)
We learn that Peter O’Keefe is not just a lone gumshoe, he’s the head of an investigative agency that’s actually doing pretty well.  Where it’s located is never totally clear, but it’s in a large Midwestern city near some big lakes. My guess is Chicago.
We soon realize that we should imagine O’Keefe as a bit of a “classic film noire” type of detective. He’s a tough guy who, along with childhood best friend Mike Harrigan, grew up wanting to become a knight of the Holy Grail. These days, he’s grown dissatisfied with his life, often having to take on work he doesn’t enjoy, because of the reality of having to meet payroll. And of course, fitting the paradigm, he often ends up finding solace in a bottle.
Harrigan, meanwhile, didn’t end up serving in Vietnam. Instead he finished college and became a powerful and successful attorney, with offices in the city’s tallest skyscraper. His office is intentionally intimidating, we learn, designed to give him the psychological edge in client negotiations. He and O’Keefe are still friends and often work together.
As the story unfolds, Harrigan invites O’Keefe to meet his newest clients, Mr. Anderson and Mr. Lufkin. They are men in their mid-fifties, we’re told, who “look like church elders.” Harrigan quickly explains that they are board members of a company called Prosperity Farms, Inc., which operates a mink farm “in the lakes area.”  It develops that Anderson and Lufkin are victims of a Ponzi scheme, and have hired Harrigan to file a lawsuit. Harrigan taps O’Keefe to do the necessary investigative work.
The job initially sounds simple and straightforward, but the reader soon discovers it is not. To begin with, it seems Prosperity Farms is run by a guy named Mr Lenny Parker, and while Anderson and Lufkin are on the board, they don’t have a clue what goes on in the company. Nor had they cared, it seems, as long as the money kept flowing.  But now the money has stopped, Lenny Parker has disappeared, and there’s no money in the firm’s account. Which not only means Anderson and Lufkin aren’t making money, it also means there’s no money to buy feed for the minks, who apparently are voracious eaters.
O’Keefe agrees to investigate, and almost as soon as he does, the story starts to morph: We learn from client Anderson that Lenny Parker is actually his son-in-law. That Anderson and his daughter, (uniquely nicknamed Tag), aren’t on speaking terms. And worse, Anderson thinks Tag and Parker may have run off together. Possibly to Tucson, Arizona, a place Tag loved. Or else to somewhere in Florida.
As O’Keefe digs in, the Ponzi scheme scenario turns into so much more — there are murders, some scary criminals, a mysterious man named Mr. Canada. And we soon realize that the Ponzi scheme scenario is just the tip of the book’s felonious iceberg. As O’Keefe tracks down Lenny and Tag, we discover there is a cocaine connection – and both are addicted. Worse, once O’Keefe and Tag meet, there is instant physical attraction. She seems to be his kryptonite, however, and he soon finds himself deeply and personally involved. No longer merely the investigator.
While the reader might wish this wasn’t the case, the story arc makes some sense, since we already know that O’Keefe and Harrigan have lost their idealism, their sense of joy and meaning in life, and have reached a nadir point in life, where they both use mindless sex and alcohol to fill in for their lost idealism. (Hey, this is the 1980s, remember?)

And – spoiler alert – he thankfully lives to see daughter Kelly again.  Given that my beloved author Sue Grafton has just died, leaving the Kinsey Mulhone alphabet series permanently stuck on the letter Y, we can all hope that McBride might step in to fill the current void in the world of mystery detective novels.

This book isn’t perfect. But it is also McBride’s first novel. He proves that he has the ability to write great action scenes that pull you in and make for a fun read. In fact, it’s my opinion that the writing is good enough that you’ll not only finish the book, you’ll actually hope for a second detective novel featuring Peter O’Keefe, the reluctant hero. Which might be possible. Because though O’Keefe almost dies in this saga, he does pull through.