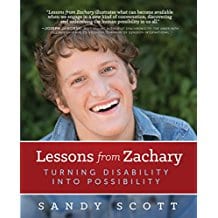 I was so delighted to learn about the existence of this book! For multiple personal reasons:
It is for these reasons that I highly recommend this book, and thank Sandy Scott for recognizing the need for sharing Zachary’s story with the world.
In her story, son Zachary was born in late 1990 with the appearance of perfect health. His APGAR score was high, and neither his parents nor the doctors had no reason to suspect he was anything but a perfect baby boy. But eleven days after his birth, when he started crying and could not be calmed, Sandy ended up at the hospital. There, she went from ER to the pediatric floor, and after batterie of tests, finally learned that Zachary was diagnosed with severe cerebral palsy and a potential life expectancy of less than one year.
Without any preparation, new Mom Sandy suddenly finds herself ripped for her past life, where she was a wife and Kinko’s employee, and transported to a life centered on her son’s hospital room, where she becomes the “mom of a very sick newborn,” surrounded by a rotation of physicians, registered nurses, phlebotomists, epidemiologists, certified nurse assistants, nurse practitioners, pharmacists, physical therapists, nutritionists, social workers, clinics laboratory technicians, dietitians, diagnostic medical technicians, respiratory therapists, anymore physicians.
As she explains, her world and identity were ” upside down, inside out, and then smashed to pieces.”
I’ll fast forward to current day, to tell you that Zachary is still alive and while he’s largely non-verbal, he is able to live on his own in a condo.  But to find out how gets tot heat point, you’ll need to read the book, as the story of this transition and the lessons Sandy, Zachary and her family learned are the hugely important stuff that make up the meat of this book.
As Joseph Jaworski says on the book’s front cover: “Lessons from Zachary illustrates what can become available when we engage in a new kind of conversation, discovering and unleashing the human possibility in us all.”
This book is highly recommended. Especially for anyone who would like to learn how to use his or her own strengths to navigate the difficult situations that each of us will eventually find ourselves in, at some time in our lives. No one gets to live a golden, problem-free life forever. No one.
I will close by noting that Sandy has become a pioneer in the field of physician Coaching and was formerly the Director of The Coaching Project with the Colorado Department of Education and Director of the Advanced Leadership Program for Physicians at Banner Health. The book includes several useful tools she has developed to help people navigate life’s challenges, find meaning and lasting fulfillment. Among them: her Life Wheel, her checklists, and her Miracle Question.