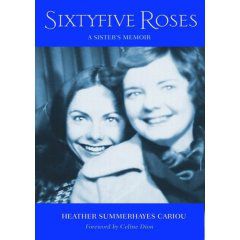 Sixty-Five Roses is truly a heart-wrenching, yet beautiful account of two sister\’s love for one another as one sister, Pam, battles daily for her life with cystic fibrosis. This memoir cast an even wider net of love encompassing and making transparent the lives of the entire family on this journey about love, understanding, illness, heartaches, and accomplishments. A lifetime story that leaves no emotion in a safe harbor.

While the family tried desperately to live “normal,” the effects of this terrible disease touched each family member\’s life, and they became instant protectors of Pam\’s very existence, as if saving her meant they could live.

Both girls strived daily to live a normal teenage life. But inside Heather, the fear that Pam would die young never left her. As a result, anger became her constant companion. Heather notes: “Looking back, I can see that I was not so much angry as I was drowning in Grief, shouting out how I too was afraid to die, afraid of the leaves falling, of the stars going out, of the river drying up. Afraid of being left behind. I was already bereft, alone in the cemetery at midnight. Anger grows from the hard kernel at the centre of grief; the feeling of being utterly powerless.”

Powerless, yes. But Heather never ran out of courage, and she never left her sister\’s side. Pam had two rocks in her life. One was an oversized pink granite rock in the front yard that Pam and Heather just knew had magical powers. They would sit on the rock, huddled together planning their dreams. The other rock was Heather. Therein lays the real “magical” power; the power of love.

Should one miss this journey of love? Not at all. This memoir is told with complete honesty and with a soft conscience. Get ready to be inspired.