Tuesday - January 31, 2023
Home » Reviews » Books » Inspiration » Heaven is for Real: A Little Boy\’s Astounding Story of His Trip to Heaven and Back

Heaven is for Real: A Little Boy\’s Astounding Story of His Trip to Heaven and Back

Heaven is for Real: A Little Boy\’s Astounding Story of His Trip to Heaven and Back

Reviewed by: Anne Holmes for the NABBW 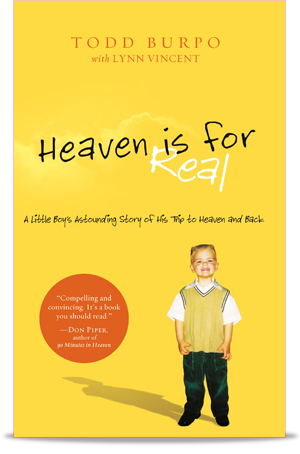 This is the true story of Colton Burpo, son of a small town Nebraska pastor who -at age four, during emergency surgery for a ruptured appendix — slips from consciousness and enters Heaven. The book is narrated by his father Todd and is available in instantly downloadable Amazon Kindle format.

Colton survives his surgery and soon begins talking about the fact that he briefly died and went to heaven, where he sat on God\’s lap and watched the doctor operating on him, while in other parts of the hospital he saw his father praying for him, while his mother frantically calls family and friends back home, activating a prayer chain.

At first parents Todd and Sonja don\’t know what to think of Colton\’s heavenly stories, but soon they decide to believe him.

Colton tells meeting his miscarried sister, whom no one had told him about, and says that while in Heaven he was cared for by his great grandfather, Pops, who died 30 years before Colton was born. In each situation, he shares impossible-to-know details. (Colton\’s parent\’s hadn\’t known the sex of their miscarried child, for example.)

At other times he describes amazing rainbows and the colors in Heaven, the fact that it never gets dark there, Jesus\’s horse, how “reaaally big” God and his chair are, and how the Holy Spirit “shoots down power” from Heaven to help us.

I was most intrigued by the chapter in which Todd Burpo shares that he and his wife spent most of the first summer after Colton\’s near death experience trying to get him to tell them what Jesus looks like. They showed him dozens of images, with Colton turning “thumbs down” to each. Finally, they\’d reached the point of merely asking, “What\’s wrong with this one?” whenever an Image of Christ presented itself.

Then in late 2006, three years after Colton\’s hospital experience, friends told Todd about a CNN report on a Lithuanian American girl, Akiane Kramarik, who also began having visions of Heaven at age 4. Now 12, she\’d begun painting remarkably mature images of her visions at age 6.

According to the CNN story, Akiane\’s mother was an atheist, and the concept of God had never been discussed in their home. The family did not watch television, and Akiane had not attended preschool. So when she began to tell her stories of Heaven, then depict them in drawings and paintings, her mother knew she couldn\’t have heard of these things from any other person.

As Todd watched a video clip of CNN\’s Akiane story on his computer, he was struck by the fact that her descriptions of Heaven, God and Jesus so closely paralleled Colton\’s – and that they had both been the same age when they began talking about visiting Heaven.

Intrigued, he showed one of Akiane\’s Jesus portraits to Colton. Here\’s how Todd describes what happened next:

“Take a look at this,” I said, nodding toward the computer monitor. “What\’s wrong with this one?”

But he just stood there studying. I couldn\’t read his expression.

“What\’s wrong with this one, Colton?” I said again.

I nudged him on the arm. “Colton?”

My seven-year-old turned to look at me and said, “Dad, that one\’s right.”

I highly recommend this book. Whether or not you have been a believer, it will certainly get you thinking.

If you\’d like to learn a bit more about Colton Burpo before deciding whether or not to buy the book, check out this video clip. Or enjoy this CNN story about Akiane, the same one Todd showed to Colton.

Todd Burpo is not only pastor of Crossroads Wesleyan Church in Imperial, Nebraska, he is also a high school wrestling coach and volunteer fireman. He and his wife Sonja, operate a garage door company. Sonja is also a children\’s minister, busy pastor\’s wife, and mom. Colton, now an active 11-year-old, has an older sister Cassie and a younger brother Colby.

Lynn Vincent is the New York Times best-selling writer of Same Kind of Different as Me and Going Rogue: An American Life. The author or co-author of nine books, Vincent is a senior writer for WORLD magazine and a lecturer in writing at the King\’s College in New York City. She lives in San Diego, California.