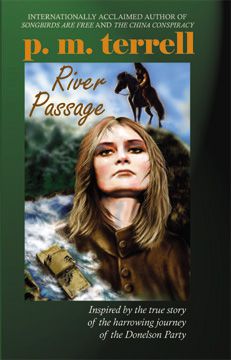 Note: This is a true story. As author Terrell tells it, her book technically falls into two genres: creative non-fiction and historical fiction. She\’s deservedly proud that her original manuscript was admitted to the Nashville Government Metropolitan Archives for use by future historians and researchers. It\’s also winner of the 2010 Bengal Book Awards. But you probably won\’t be thinking too much about this once you start reading. No, you\’ll just be turning the pages as fast as you can…

Terrell weaves an amazing tale, allowing us to join her ancestors, the Neely family, on their journey west from Virginia to Tennessee via flatboat, in 1779-1780. They were part of a journey history has deemed the “ill-fated Donelson Party.”

The trip was supposed to take four weeks, but instead it took four months – four long, cold months — December through April.

I\’ve never been in a flatboat, but I have seen a real wagon, from a wagon train. They are not as large as a minivan. I imagine the Neely\’s living space wasn\’t much larger, as we learn that it was roughly one-fourth the size of the home they left…and had to contain all their food and possessions, too.

At one point, Mary and Elizabeth are talking. The discussion goes like this:

“…None of us knows what the future holds. We just have to keep getting up, dusting ourselves off, and keep on a\’goin\’.”

“And just where do you figure on getting the strength for that?”

“Sometimes you don\’t have much choice. You put one foot in front of the other. And you keep doing it until you\’ve gone a yard and then a mile and then ten miles.”

No wonder they call it the pioneer spirit.