Friends of the Wigwam: A Civil War Story

Given that I live in Galena, Illinois, one of the main settings of this book and the home of nine Civil War generals, and I also have a fondness for history, I was delighted to be invited to read a copy of “Friends of the Wigwam” a meticulously researched Civil War-era historical novel.

With the exception of scenes that take place in Chicago and on Civil War battlefields including Vicksburg, Shiloh and Missionary Ridge, the majority of the story takes place in northwestern Illinois. Specifically, in Galena, Freeport, Buda, and Warren, and along the Pecatonica River. The locations and incidents described are, for the most part, real places and events, just as most of the people – including four of the six titular “Friends” – are real people. 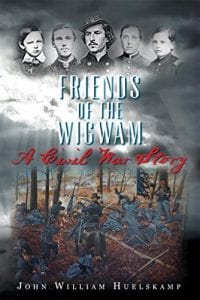 The book opens on the shallow banks of the Pecatonica River, near Freeport, Illinois, in the summer of 1857. Life there seems slow and idyllic for teenagers Will and Aaron. As we meet them, they are spending the hot, humid summer afternoon relaxing and fishing, and somehow end up discovering a well-hidden cave.

As they explore it, they realize it is an abandoned Indian wigwam, still containing some artifacts of its former inhabitants. (As you read this part of the book, it is easy to imagine Will and Aaron as doppelgangers of Mark Twain’s iconic characters, Tom Sawyer and Huck Finn.)

Will and Aaron quickly dub themselves Friends of the Wigwam and decide to make the cave their special hideaway, keeping its hidden existence a secret.

Soon however, they share their covert cave with gal pals “Allie” Hodgers and Jenny Putnam, fast friends who are as different as night and day – Allie is a tree-climbing country tomboy while Jenny is a more citified young lady. And then with two more boys from nearby Buda, sharpshooter T.J. Lockwood and his fishing buddy Trick (Patrick) Kane.

Over the next few years, as history leads us closer to the Civil War, the book’s settings shift between life along the Pecatonica and the national scene. With most chapters titled by date and location, (made possible by author John Huelskamp’s 30 years of meticulous research), we meet Republican Congressman Elihu Washburne, Fire Marshall (and later Colonel) Holden Putnam, John E. Smith, U.S. Grant, and even Abraham Lincoln, as well as others who will play an important political role leading up to the nomination of Lincoln at the newly-constructed Wigwam in Chicago in the summer of 1860.

While the book is termed historical fiction, the fact is, only Will and Aaron are fictional characters, while the remaining four Friends – Allie, Jenny, TJ and Trick – are real people.

I think this helps to make the story of what happens to them all the more fascinating. It is almost as if we are there with them, sharing their day to day lives. Somehow, even the most minor details become fascinating.

As time passes and the war heats up, our six Friends become even more caught up with the events of the time. By 1862, Will, Aaron, T.J. and Trick have enlisted in the Ninety-third Illinois Volunteer Infantry. Of course, Allie and Jenny remain in Freeport, awaiting any word they can get regarding the whereabouts and welfare of their friends. (Or do they?)

The first full-on battle described is the Battle of Shiloh, and the description is very powerful and immediate. Later in the book, a letter from a father, Major Luther Cowan, who was in that battle is delivered to his daughter, and we read what fighting has felt like, to him. It is eye-opening in its compassion and honesty.

The personal stories of the friends and their families eventually completely converge with the war. Thus we are present on the battlefields, reading of the horrors of the Civil War in the words of family and friends back home, as well as those of battle tested soldiers, including three of the Galena-based generals — Ulysses S. Grant, (Galena’s most famous general), Ely Samuel Parker and John E. Smith. Through use of their actual words, author Huelskamp deftly brings the anguish and the reality of this war to life without the use of drama or artifice.

Ultimately, this is less a story of the Civil War than it is a story of a group of people who played both major and minor parts in the War, both through fighting and by waiting and serving back home. The photographs included at the end of the book, as well as the letters reprinted throughout, and the (well-selected and non-intrusive) footnotes, bring these people’s stories into focus.

Author John William Huelskamp is a Civil War historian. He has contributed to several Civil War periodicals including “Civil War Regiments: A Journal of the American Civil War.” His publication, Never Forsake the Colors, reintroduced the sacrifice of Union Colonel Holden Putnam and the 93rd Illinois Volunteer Infantry.

Huelskamp is also a contributing lecturer to Civil War round-tables and historical societies, and has provided Civil War authors including Peter Cozzens (The Shipwreck of Their Hopes) and Wiley Sword (Mountains Touched with Fire) with rare documents and diaries that have contributed to an understanding of civilians and soldiers during the climactic years of the Civil War. He resides in Deer Park, Illinois.

Should you decide to read and enjoy this book in its entirety – and I hope you do – you will be thankful for the “Afterword” where the author lists and describes the major characters. This helped me keep them straight as I read the book and also provides interesting information concerning the post-war life of those who survived the conflict. 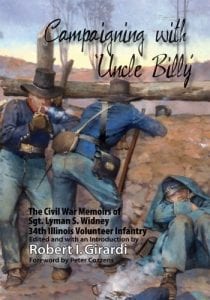 The original painting, circa 1994, is oil on canvas by Keith Rocco, whom the author credits in his acknowledgements as one of two people who encouraged him to write a creative historical novel on Northern Illinois history.

The other “godfather” of this book’s concept, is Civil War author Rob Girardi, of Chicago, who edited and wrote an introduction to Lynne Crumpacker’s Campaigning with Uncle Billy: The Civil War Memoirs of Sgt. Lyman S. Widney, 34th Illinois Volunteer Infantry.

For anyone with an interest in well-researched historical fiction, which includes this reviewer, Friends of the Wigwam is highly recommended!