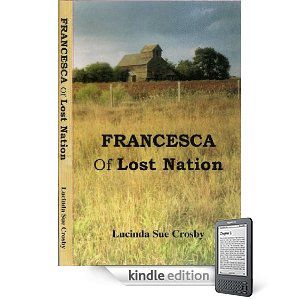 You’ll have a hard time putting this book down, once you start reading it.

This is a coming of age story, set in Lost Nation, Iowa, a real farm town located in Eastern Iowa, about halfway between Davenport and Dubuque. Today there are about 500 residents in Lost Nation, and it’s unlikely the population was any larger during the summer of 1947, when this story takes place.

Nine-year old Sarah Morgan narrates the story of how she and her 59-year old grandmother, Francesca, spent that summer. They’re living alone in the Main House at Home Farm, a piece of land that had been in Francesca’s family since the Pittschticks first began arriving from the Old Country in the 1850’s, and which will eventually be handed down to Sarah and her mother, Rachel, Francesca’s only child.

They’re alone on the farm, because Sarah’s parents, Rachel and Daddyboys, are unexpectedly off on a Grand Tour of Post-WWII Europe.

You might not think anything much would happen during the space of a summer in such a small community, but you’d be wrong.

It’s a summer filled with all sorts of adventure and intrigue, including:

But wait, there’s more: This book is filled with more than just a series of summer adventures, it is a multi-leveled love story encompassing two main relationships: The first, between Francesca and Matthew Mosley, older brother to the town’s sheriff, who ends up living in a cottage on the farm while recovering from a barnstorming accident and the second between Francesca and Sarah…

Subtler but no less important themes include:

Author Crosby is an award-winning journalist and environmentalist, as well as a published Nashville songwriter, a former film and television actor and a former professional athlete. This is her first novel, but hopefully it won’t be her last.

There’s an autobiographical tint to the novel, though it IS a novel and not a memoir. According to Crosby: “The most significant impacts on the person I am now – on my views, my dreams, my value system, the spiritual and physical me – were created by my grandmother, Frances Ella Pittstick Mendenhall and an incredible canine companion, Babe the Wonder Dog.

“This novel gives me a chance to share those two great treasures of my life with others. And it keeps their memories warm and glowing in the forefront of my mind’s eye.”

You’ll enjoy this book. If you can’t wait to read it, you’re in luck. The first five chapters are available on Crosby’s website, and you can instantly download the entire book to your Kindle reader, courtesy of Amazon.com.