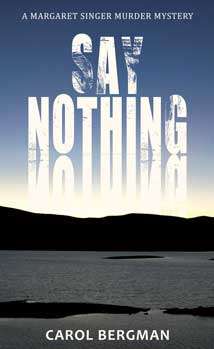 Say Nothing is Carol Bergman’s first foray into the murder mystery genre, but since the cover indicates that is “A Margaret Singer Murder Mystery,” I suspect she has plans to write more about her 58-year old private investigator, who prefers to be called Peg.

Readers learn from page one that Peg is a strong, independent woman who’s oblivious to her age, lives in upstate New York, has been unmarried for 20 years and is happily encumbered with a 30-something daughter whom she loves dearly.

It’s 2008 as we’re quickly drawn into Peg’s world, and this story, which has a ripped from the headlines appeal: she’s hired to solve the disappearance of a decorated Iraq war veteran, David Rizzo. She’s not alone in her search. She’s working with a friend, New York State Police Senior Investigator Charlie Griffith. And they are quickly dealing with the FBI, the CIA and an interesting group of bad guys…

Bergman’s style is fast-paced, complex and challenging, and she’s not one to waste words. The entire book is well under 200 pages.

I’m a fan of detective novels, and there are aspects of Bergman’s work that evoke the best of Sue Grafton, James Patterson or Jonathan Kellerman. I hope Bergman becomes as prolific as they.