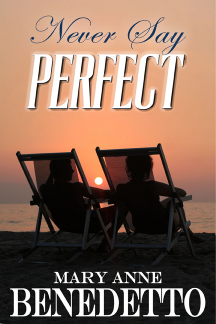 Laina and Dan Strickland, whom you may remember from Mary Anne Benedetto\’s first novel, Eyelash, return in this second book in a series. Or at least, Laina is back. We only see Dan in the first chapter.

It seems that things have been going well at Paradise View, the Strickland\’s Cape May bed and breakfast since last we spent time with them, four years ago. Life has been really hectic for both of them, what with running the B&B and some outside work Dan\’s squeezed in – finishing up with an old client.

As the story opens, Dan and Laina are heading to the airport in Charlotte, North Carolina, having just enjoyed a wonderfully romantic second honeymoon in Pawleys Island, South Carolina. The last two weeks have just flown by, Laina realizes, as she settles into a seat near their gate, and waits for their return flight be called. In fact, she tells Dan, they were wonderfully perfect.

Laina\’s fully engulfed in a delightful novel, and their flight\’s about to be called when Dan whispers to her that he\’s going to make a quick visit to the men\’s room prior to boarding. And that\’s when Laina\’s life changes.

The next thing she knows, the PA system announces boarding for their flight, but Dan\’s not back. And after a frantic search, Laina is forced to miss the plane because Dan has mysteriously disappeared.

Of course, no author kills off a main character, so a lot of questions follow: Where is Dan? How could he have mysteriously disappeared? What inexplicable secrets was he hiding? Why had he seemed so loving and blissful during their vacation only to suddenly vanish? Will the weight of disaster cause Laina\’s faith to crumble?

Laina eventually hires a detective, Conner Blake to help her find out what has happened to Dan. And thankfully, Dan\’s brother, Sam, who had agreed to run their Paradise View B&B during Laina and Dan\’s holiday, is able to stay on while she and Conner retrace the trip, looking for clues.

Author Benedetto takes the reader from Pawleys Island to Cape May, and from New York City to Milan. It\’s an emotional journey for Laina and her family. Will they ever discover why Dan told Laina that she should “Never Say Perfect?”

Anne Holmes
As "Boomer in Chief" of the National Association of Baby Boomer Women, Anne is passionate about educating, empowering and enriching the lives of women in their middle years. Actively involved with a number of Boomer-focused organizations and committees, she keeps a steady finger on the pulse of this spirited generation, with the goal of helping you to enjoy life, stay healthy and live lives that are rich in every sense of the word. Anne is often interviewed by the media and in addition to writing on behalf of the NABBW, she publishes www.BoomerWomensWorld.com and blogs at www.BoomerLifestyle.com
Tagged: Anne HolmesBaby Boomer WomenBaby Boomersbook reviewbooksboomer womenBoomer Women SpeakBoomersNABBWNABBW.comNational Association of Baby Boomer WomenNever Say PerfectReviewed by: Anne Holmes for the NABBW