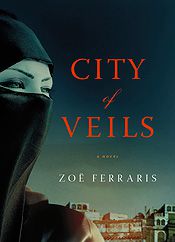 This was a fascinating read. The author, who moved to Saudi Arabia after the first Gulf War to live with her then husband and his extended family of Saudi-Palestinian Bedouins, writes with authority. As a result, she is able to provide the reader with a searing portrait of the religious and cultural veils that separate Muslim women from the modern world.

Certainly we have all heard horror stories of how women are treated in Saudi Arabia, but this novel goes beyond stereotypes and focuses on realistic characters. As a result, we are able to see Saudi culture from several angles as we meet and begin to understand the book\’s characters.

They include a devout Muslim man determined to follow religious law while wrestling with his feelings for a woman; a more progressive man who seems determined to ignore old-fashioned practices; an American man bewitched by the place; a young Saudi woman comfortable in her role while still feeling its restrictions; and a lonely American woman attempting to find her way in an unfamiliar land.

The book grabs you from the first page, as we read that the badly beaten and burned body of a young woman washes up on shore near Jeddah, Saudi Arabia. Inspector Osama Ibrahim doesn\’t hold out much hope for finding her killer. But, with the aid of Katya, an ambitious lab tech, he manages to discover the identity of the victim and begins investigating her life and death.

Katya is a bright young woman who follows oblique clues and assists Osama in the field, as well as enlisting the help of an old friend, Nayir. We learn that she has feelings for Nayir, though she hasn\’t spoken to him in some time, and a romance begins to blossom.

The personal entanglements become even more complex, whenKatya and Nayirmeet Miriam, a lonely American woman in need of help in finding her husband. It seems he had picked her up at the airport from her visit back to the States, taken her home, gone out for food – and never returned.

You\’ll begin to understand the nuances of Saudi American life through reading this book. The story of how Miriamhas to wait at the airport in a special room reserved for “unclaimed women” because her husband is late arriving to pick her up,is eye-opening. So was finding out that Arab homes have two living rooms – one reserved for men, which women may enter only to serve food. And who would have believed that Katya must pretend to be married in order to be allowed to work as a technician in Jeddah\’s homicide force?

City of Veils combines a suspenseful and tightly woven mystery with an intimate and nuanced portrait of women\’s lives in the Middle East.