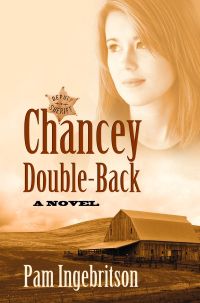 CHANCEY DOUBLE-BACK, set in a sleepy little town in New Mexico, is the story of two families from the opposite side of the tracks. However, when murder occurs, even sleepy little towns must face the facts, and in this case…the past.

The town’s most evil of men, Dan Sullivan, is found murdered and suddenly the underworld of corruption, deception, and betrayal are front and center. This death brings to light the sins of the father which were before, only whispered among the neighbors and town folks. Murder most foul, yet some would say well-deserved, Sullivan’s demise becomes the focus of Lincoln County’s most capable Deputy Sheriff, Robbie Jenkins.

The interviews consist of a long list of suspects whose lives entwine and who all had reason for wishing Sullivan dead. From the estranged Sullivan sisters, to his “ex” who fled years earlier vowing never to return, and the daughter left behind, to the wealthy neighbors and seedy characters who were known to have “deals” with the deceased.

Trusting no one but herself, Sheriff Jenkins cast her net over the wide perimeter of suspects hatching her own plan to reel in the killer. Friends, former lovers, parents, neighbors, and co-workers—all were tested to the limits, and all were suspects. A long and character-saturated read, with twists and turns in nearly every chapter as mystery and the mistakes of a lifetime are all revisited in Chancy Double-Back. A novel of the most intriguing kind. My kind of reading.