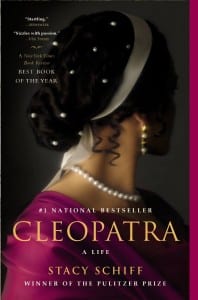 Cleopatra: A Life
Author: Stacy Schiff
Reviewed by Anne Holmes for the NABBW

This is an amazing, “can’t put down” type of book. Something I’d never have anticipated, since it’s a biography of a person who lived and reigned Egypt at least thirty years BC. So huge credit goes to author Stacey Schiff, who not only did her own research for this book, but writes of Cleopatra in a very compelling way.

Consider, for example, the opening paragraph to the first chapter, titled, “That Egyptian Woman:”

“Among the most famous women to have lived, Cleopatra VII ruled Egypt for twenty-two years. She lost a kingdom once, regained it, nearly lost it again, amassed an empire, lost it all. A goddess as a child, a queen at eighteen, a celebrity soon thereafter, she was an object of speculation and veneration, gossip and legend, even in her own time.

“At the height of her power she controlled virtually the entire eastern Mediterranean coast, the last great kingdom of any Egyptian ruler. For a fleeting moment, she held the fate of the Western world in her hands. She had a child with a married man (Julius Caesar), three more with another (Mark Anthony). She died at thirty-nine, a generation before the birth of Christ.

“Catastrophe reliably cements a reputation, and Cleopatra’s end was sudden and sensational. She has lodged herself in our imaginations ever since.”

Schiff goes on to remark that while Cleopatra has had one of the busiest afterlives  in history, going on to become an asteroid, a video game, a cliche, a cigarette, a slot machine, a strip club and a synonym for Elizabeth Taylor, the fact is, as she makes clear in this book, we remember her for the wrong reasons.

We ought to be remembering Cleopatra for the fact that she was a capable, clear-eyed sovereign, a ruler who knew how to build a fleet, suppress an insurrection, control a currency, alleviate a famine.

Moreover, she had a capable grasp of military affairs, and at a time when woman rulers were no rarity, she stands out as the sole female of the ancient world to rule alone and play a role in Western affairs.

Incomparably richer than anyone else in the Mediterranean, Cleopatra was descended from a long line of murderers and held her own in that area. For example, I had not been aware that she was actually married twice, each time to a brother. She waged a brutal civil ware against the first, and poisoned the second. And while her palace shimmered with onyx and gold, it was richer still in political and sexual intrigue.

Except for the amazingly detailed 60-plus pages of Author Notes at the end, not to mention the handy Reading Group Guide and the several pages of color photographs which help the reader imagine Cleopatra’s world, this book reads like a novel. It sizzles, it amazes, and it’s a glorious read.