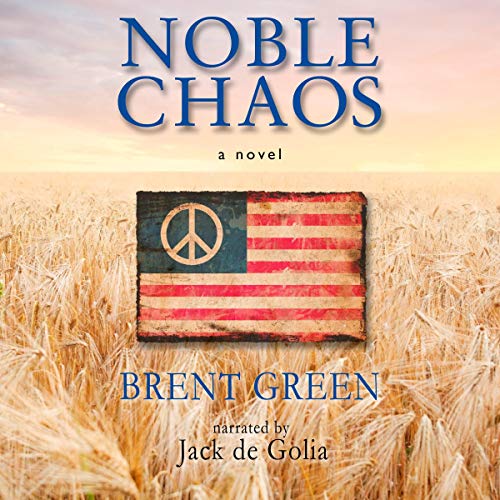 Let me begin my review with this disclaimer: Brent Green’s Noble Chaos, is a book that powerfully resonates in my heart. It speaks deeply to me, as not only was I a student at the University of Wisconsin-Madison during the early 1970s, but Madison is my hometown. Which means I was there during the 1960’s, when that campus became a hotbed of student activism, with student protests mostly focused on the highly unpopular Viet Nam war.
In high school, I had a part-time department store job at a shopping mall on the other side of Madison from my hometown. Because Madison is located on an isthmus, with the campus as the center, I had to cross into the campus area to get to my job. The city buses only ran hourly in the evening, so I generally drove my mother’s car to work. I will never forget having to drive past blockaded areas and through the protest areas, which were often on fire at night. In retrospect, I’m surprised my parents allowed me to do this!
For me, it’s been more than 50 years (October 1967) since opposition to the Vietnam War led some Madison students to stage a what began as a peaceful protest against the fact that the Dow Chemical Company– manufacturers of napalm, the flammable gel the US used on the battlefields — was holding on-campus student job recruitment interviews at what was then known as the Commerce Building.
What began as a peaceful act of civil disobedience turned violent as city police officers with riot sticks forcibly removed students from the building where they were holding a peaceful sit-in to physically block the Dow interviews. The clash involved thousands and injured dozens. Beyond that, it hardened campus relationships, became a catalyst for a new wave of emboldened pacifists and propelled the Madison campus to the forefront of the national antiwar movement. UW-Madison students soon learned to be thankful when the Governor would call out the National Guard, because — as the students quickly discovered — the Guard were professional soldiers and nowhere near as likely to club them, kick them, or shoot them!
I also believe the Dow Riot was the first protest at a major university to turn violent and the first time tear gas was used to disperse a crowd on that campus.  Personally, I was in 9th grade at the time, so had pretty much been able to ignore the war and live a typical high school student life, even though I saw evidence of it nightly on the national news, and had many classmates whose older brothers had been drafted into service.  “Hell no, we won’t go!” was a mantra I had heard and understood, but from a theoretical point of view. However, life in Madison changed for all of us — no matter what our age — after that first student riot.
As my father had previously attended the same campus during the early fifties on an ROTC commission, I also remember how huge rifts developed in so many families. Rifts caused because our uncles and fathers who had served in World War II or Korea and who were strongly opposed to Communism could not understand why we — their nieces, nephews, sons and daughters — did not see Vietnam as a righteous war, and in fact strongly and conscientiously objected to it, desperately urging for pacifism. Some even going so far as to move to Canada.

All of this personal history came back to me, as I listened to this powerfully descriptive book which takes place on the University of Kansas campus, located in Lawrence, and describes student Ryan Sterling’s coming-of-age experience during the early 70’s. Brent Green crafts a story of a young man’s passage into adulthood during a time of Noble Chaos. In twenty chapters, Green manages to deal with the civil rights movement, women’s efforts for equality and the student antiwar movement, including their effort to remove ROTC from campus, stories of how the war impacted campus life – including riots and violence, as well as the on-campus use of experimental drugs such as marijuana, hashish and LSD — and at the same time tell us of the love story between Ryan and Letty.
Author Green successfully tells a great, multi-faceted saga through his telling of 19-year-old Ryan’s campus experience. He details the history of the period, drawing upon historical fact to create an immersive story that will probably resonate with you in the same way it did for me. Especially if you also lived through this historic time in US history. Green does an excellent job of telling the University of Kansas’s history from a student’s point of view. In other words, we see the Vietnam War conflict from the perspective of how it affected those of us who were college students back home.
I was especially intrigued that every chapter essentially told its own story. This allows the reader to experience the full 1970’s era KU campus lifestyle with pretty much all of the nuances, all of the conflicts. Noble Chaos not only covers the antiwar movement, but also delves into stories involving race and gender, the age of free love and sexuality as well as the heavy use of experimental drugs – marijuana, hashish and so much more. Readers will be especially caught up in the story of how Ryan’s friend Merle transitions from being a law student to a revolutionary. But the stories of Steve the student who is a Vietnam war vet, as well as those of Letty, Richard and Vinnie are crucial as well.
And because most of the major characters were developed to the point of having their own storyline,  Green is able to detail the full student experience — detailing their emotional rollercoaster lives as they live through the timeframe of the novel.
Each character is well-developed and unique; all are essential to the storyline. Their growth moves the story along at a steady pace and I found the dialog realistic and poignant. For those of us who also lived through this time period, the book is a memory that is realistically freshened; younger readers, experiencing life in the 70s for the first time, will likely find some parts of this collegiate tale, such as the Ryan-Letty love story, hauntingly familiar.
I cannot close this review without highly recommending you experience the audiobook version. Narrator Jack de Golia is extremely impressive. He not only manages to gift every character with his or her own unique voice, but also make those characterizations unobtrusive enough that they do not to disrupt the narrative flow or cloud the listener’s connection to the words.
Highly recommended.