Friday - February 3, 2023
Home » Reviews » Baby Boomer Women: How to Form a Lasting Relationship With Them

Baby Boomer Women: How to Form a Lasting Relationship With Them 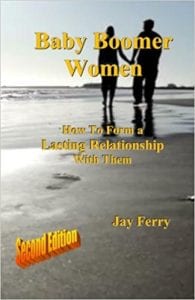 It’s official: Fully one-third of us Baby Boomers are single.
Using US census data covering nearly four decades, researchers from Bowling Green State University’s Center for Family and Demographic Research have determined that the percentage of unmarried Baby Boomers rose from 22- to 34-percent between 1980 and 2009.
Also, say I-Fen Lin and Susan Brown, the researchers involved with this work, more Baby Boomer women than men are unmarried. And, since women live longer than men, the percentage of formerly married women who have become widowed is also increasing. Furthermore, women typically spend more time being single, found Lin and Brown, although this gender gap in declining.
Apparently there are a number of statistically significant reasons for the high numbers of middle-aged and older people who are single, but the “why” doesn’t really matter, according to author Jay Ferry, himself a Baby Boomer who’s been twice widowed and is currently in a committed relationship.
Instead of analyzing the raw data, he’s pragmatically written a very practical book whose sole purpose is to help befuddled Baby Boomer men learn how to form long-lasting, successful relationships with Baby Boomer women.
Any Baby Boomer who’s just getting back into the dating game knows there’s a need for this book. The rules have changed since we were young.
Ferry begins with the basics. He suggests that Boomer men remember four basic concepts to start. These concepts are well-explained in the book, but in short, they are:
Next, he reminds the reader that counselors advise that there are “Four C’s” to a successful relationship, and it is his goal to help guide single readers into a “Four C-worthy” relationship. The four elements, which again are well-documented in the book are:
Beyond a doubt, the best part of Ferry’s book is the stories he tells. All are true, although, unless he’s telling a story on himself, the names have been mercifully changed to protect those involved.
In closing, let me say that I have read relationship and dating books by highly credentialed experts, marriage counselors, and the like. This is not one of those books. Instead, it’s heartfelt advice from a man who’s been in the proverbial trenches, and come back to report to his fellow Boomer Men what has worked for him.
This book is a fun, entertaining and insightful read, even for those of us Baby Boomers who are currently married. (After all, a relationship is a living thing and must be nurtured. Ferry’s four basic concepts and four C’s apply to everyone. )

Tagged: Baby Boomer Women: How to Form a Lasting Relationship With ThemJay Ferry