Never Underestimate the Power of a Menopausal Woman

By Phyllis Coletta, JD, for the NABBW 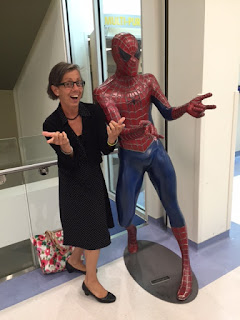 Menopause is an unexpected visit from a relative, showing up on your doorstep without invitation all fat and cranky. You must let her in — she’s stronger than you — and before you know it, there’s hair in the sink and she’s sticking her face in the freezer. Before this intrusion, before your body starts morphing into your mother, men stop looking at you, just like that. Gravity takes its toll; your waist disappears so you basically look like a vending machine, and you become invisible. Sounds awful, but there are great advantages to all this. There is a power that comes with this rite of passage that — if used wisely — can freaking change and rock the world.
If I was President I’d stack my Cabinet with menopausal women. Time is short, the nights are long and we’re ornery. No longer beholden to the culture’s standard of beauty, we can surreptitiously go about our business, emboldened by hot flashes and a total “who gives a rat’s ass” attitude about everything.
Menopause is Nature’s Liberation, and with the loss of libido comes a lot more time and energy than you can imagine. You can literally put the men on pause and start focusing on yourself. At this stage, we no longer suffer fools, and when you’re in the midst of the “change,” nearly everyone seems a fool. Menopausal women are a force of nature, and you should know better than to mess with Mother Nature. So, if the Cabinet, or Congress or — for the love of God, the WHITE HOUSE — had women over 50 at the helm, stuff would get done or there’d be a problem you don’t want to have. We pack heat, alright, and it has nothing to do with guns.
I’m not going to lie here. In this piece about menopause I’m actually pitching a presidential candidate who will blow your mind and it’s a guy. I don’t have time to be anything other than truthful because at this point in life we’re burning daylight and if a guy’s going to get it done, I’m on board. But before I get to him, here’s the story of my mid-life political awakening.
In my early 50s, lifting my head up after decades of work and raising kids I started thinking about Retirement. Doing my research, I found I’d need damn near a million bucks to retire. WTF? Where was I going to get that kind of cabbage? And, more importantly, if it was going to take a million for little ole me to retire, what about my kids?
Three boys, all married, everyone working so hard and not one of them anywhere near that blessed “one percent” — the place where the money supply has landed. Would they ever get to retire, or would my oldest, Bill – an energetic restaurant manager – be working at a 7–11 in his eighties? What happened? Who fell asleep at the switch and how did all the money get siphoned to the tippy-top? I panicked and started buying lottery tickets to ensure the financial stability of my descendants. Great plan, eh?
Then I took a closer look at how hard my kids and their wives were working and still barely keeping their heads above water. Joey, my youngest, is in law enforcement and his wife Kaya is a mechanic. They have worked diligently to get out of debt and buy a little house but there is absolutely no margin for error. If the car breaks down or a kid gets sick, there’s more month than money. The wolf is always at the door.
After the government shutdown, I learned that 78% of Americans live like this, paycheck to paycheck and 57% — like Joey and Kaya — don’t have an emergency fund of $500 in case something goes amiss. The old American saw about hard-work-leads-to-success has jellied into full blown bullshit. Hard work is just hard work and the clear majority of Americans have no success at all because they live on the financial precipice. As the fog lifted and I saw the yawning economic gap between the haves and have-nots, I was stunned. But then something happened, and I moved up a level from stunned to furious.
Warning: do not piss off a 62-year-old Italian grandma, even if you’re a huge demographic of old white guy legislators or a fucking gaggle of 30-year-old techie billionaires in hoodies. Don’t do it.
Joey called me one early morning, in intractable pain from recurrent knee swelling. He couldn’t get out of bed, go to the bathroom, or help Kaya with the kids — let alone put on his uniform and go to work. But you know where a deeper pain showed up? “I don’t want to go to the ER,” he said, “We can’t afford the $100 copay.”

And that was that.

On my watch, in my lifetime, my beautiful country had morphed into a place where people were afraid to go to the hospital because of a copay. Not just “people,” but my endlessly hard-working kid and his family. We’ve become the wealthiest poor country in the world just like that — snap of the fingers, blink of an eye and wealth and prosperity is hoarded into a tiny corner while folks work three jobs to stay afloat, and entire towns deflate as factories close and men and women in their 50s and 60s can’t find work. This is how Trump got elected. It wasn’t Russia or Facebook.
Over 4 million jobs were automated away and plenty more are on the horizon. Trump named the pain these jobless folks felt and rode the wave of their despair into the White House where he proceeded to not give a shit about them. And now it’s personal. While I grieved for folks in Ohio and Michigan, all the unheard voters who lost jobs and lives, now I saw the despair of my family, a creeping tide of economic disparity; a gap so big that millions of people shared Joey’s fear: if I get sick, we go down the tubes. This ends now. I sent Joey a couple hundred bucks so he could go to the ER, and sat down to unleash the power of the keyboard.
For several years, as I read about what happened to our economy since the boom of the 80s, I came across the notion of Universal Basic Income (UBI)– a guaranteed payment of “x” amount to every adult citizen, regardless of circumstances. Like most people hearing about this concept — as old as our country itself — I didn’t believe it could be possible, but I couldn’t dismiss it out of hand either. Digging deeper, I saw that UBI has been supported for hundreds of years by thinkers like Thomas Paine, Martin Luther King, Milton Friedman, Stephen Hawking, Warren Buffet, and Bill Gates. What if everyone had a shot at capitalism? It’s just like the game of Monopoly — everybody starts with a bank. The only way you move around the board and succeed, is with some starting cash in your pocket.
Enter my middle son, John, a black belt in Brazilian Jiu Jitsu who lives and works in Panama. We talk about all kinds of things, and were sending articles and info about UBI back and forth to each other. One day I got an urgent WhatsApp from him: “Dukes!” (my nickname for some reason), “Stop everything and listen to this Joe Rogan podcast! There’s a guy running for President who believes in UBI!”
And I did. I stopped everything and sat spellbound for an hour and a half listening to Andrew Yang talk about the Freedom Dividend — his plan to give every American 18 and over $1,000 a month — unconditionally. Doesn’t matter how rich or poor you are, everyone starts at $1,000 a month. Since automation and tech is decimating jobs and enriching companies like Amazon (which paid no federal taxes), Google, Apple, Facebook etc., then we — as shareholders in this great country — should receive dividends from them. It’s capitalism pure and simple.
We provide the policies and infrastructure to allow these advances and profits and we share in the success. Brilliant. Yang will implement a Value-Added Tax (VAT) of 10% on tech companies, and this along with a vast saving in welfare programs (safety net recipients can choose one or the other), would fund the Dividend fairly easily, with little inflation and lots of benefits to Main Street, commerce, and the normal people who can’t get the financial boot off their throats.
I became obsessed and read everything I could about Yang; watched all his videos, listened to every podcast. Within two weeks of that call from Joey I was fully in the Yang Gang — a huge and devoted internet following supporting this most unlikely candidate. He’s been to Seattle twice and both times he has blown the roof of the place. The guy is brilliant and he connects at a very deep level. Anyone else — like my friend Gael Zane says — sounds like Charlie Brown’s teacher: Wha wha wha wha

Back to me and menopause.

I am pissed off. So many people are struggling and suffering and we keep electing old rich white guys who maintain the status quo and build their personal wealth off the backs of normal people. And yes, it’s personal. Yang gets this: How can I leave this world to my kids and grandkids? The nest may be empty but my heart is full and my passion — no long depleted by sex or other people’s needs — is enormous.
I’m on fire, alright and do not underestimate what a female after fifty can do because I will do whatever is necessary to get this leader in the White House so he can right the ship that we have allowed to sink with our greed and blind self-interest. In my younger days, I would care what people thought about what and did and why. That’s no longer a concern
I see a future now where people just go to the doctor when they’re sick, can you imagine? I see factory towns flourishing not through minimum wage soul-sucking government jobs — and those factories are closed for good, of course — but through people putting money into their communities, or going to trade school, or pooling family resources to start a business. I see stay at home moms finally feeling valued for what they do, and women able to leave toxic and abusive relationships because they can.
Yang’s vision is mine now too and once you’ve seen this future you can’t see any other candidate. I can’t leave my kids a million dollars, but Andrew Yang is my legacy. In the liberation of this time of life I have more power than a football player, more time to use my skills and talents, and the focus of a freaking Jedi warrior. We aren’t helpless pawns in the political game anymore, despite the parties’ shenanigans. We have the power, and we’re going to use it. I’ll see you Wednesday, January 20, 2021. I’ll be the old broad leading the parade.

NOTE: This article was originally published in Phyllis Coletta’s blog, www.BarefootBroads.Blogspot.com and is republished here with her permission.