Monday - May 23, 2022
Home » Member Articles » How I Cyberstalked My Son Through Eastern Europe

How I Cyberstalked My Son Through Eastern Europe

It was the best and worst hug ever. We stood at Los Angeles International Airport saying goodbye as our son left to study abroad in Prague. His hug was tighter than usual and lingered longer. It said more than any words that a 21-year-old could say. Then off he went on his adventure. And as any typical parent, I was worried but excited for him.

With the help of online banking and Google, a San Luis Obispo mom stays connected to her 21-year-old son traveling abroad

This phase of parenting — letting go — is the hardest one of all. You are used to being the center of his life and now you must hover around the edges, ready to provide support and guidance — only when asked. So how to get through these next six months while he was away on the other side of the world? How to stay connected but not visible? Little did I know that online banking would be my salvation. 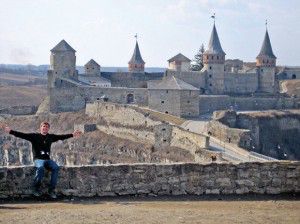 Once he arrived in the Czech Republic, it was several days without any word from him. Of course, he was settling into the routine of living in a foreign country. I was anxious to know what was going on, but no word yet. Then his first debit appeared in his account, which is linked with mine so funds could be easily transferred for living expenses and in case of emergencies. I sighed with relief — he was alive and well!

From that point forward, his online banking proved to be the best way for me to feel connected, especially once he started to travel on the weekends, spring break, and eventually over the summer months.

I would wake each morning with much excitement and check my son’s bank account. Then I would “Google” where he went — checking out the hostel, restaurant, store, or tourism website. Through the Internet, I explored everywhere he visited and felt like I was traveling alongside him. I never thought how much I would want him to spend money!

(NOTE: To see an annotated map of the places Debby\’s son visited, click the link)

One of his first trips away from Prague was to Krakow, Poland. Eastern Europe was experiencing one of the coldest winters on record. I followed him to Poland — saw the transaction for the train ride, took a virtual tour of a unique hostel named Good Bye Lenin, and was pleased to see he bought a new down jacket to survive the weather. I was in awe of this beautiful historical city in winter — you could feel the brisk cold accentuate the massive architecture even while looking at online images.

Another long weekend took him to Belgrade, Serbia. Along the way, his train made a stop in Hungary. I knew that because of an ATM withdrawal in the Budapest train station. I traveled with him in his rental car as he visited the famous Fruska Gora — an expansive and breathtaking national park considered the jewel of Serbia. Even such a beautiful country could not mask signs of a past horrific war among the tall trees and city landscapes.

During spring break when most of his friends went to traditional destinations such as Paris and Barcelona, my son went to Romania and the Ukraine. His intent in Romania was to visit the birthplace of Dracula. I learned about the medieval city of Sighisoara and experienced the trip to the majestic and foreboding Bran Castle in Transylvania. When visiting Kamyanets Podilsky — one of the oldest cities located in western Ukraine — my son learned that most Ukrainians were not accustomed to seeing Americans and spoke little English. But I was able to stay connected to him through the universal language of ATM machines!

It was during the summer months that my son traveled extensively to many different countries. There was the historic Mostar Bridge in Bosnia, the seaside town of Zadar in Croatia, the Grand Bazaar in Istanbul, and the Old Town of Tallinn, Estonia. Oftentimes, I did not know where he was until a debit transaction appeared.

His favorite spot was the enchanting country of Slovenia. Through “woofing,” he found a volunteer opportunity on a rural farm. WWOOF is a worldwide network of organizations that link organic farms with volunteers.

Being far from a city, I did not expect much activity so I resigned myself to a week of quiet. Then a few days later a debit appeared in his account. It was from a small town in southwestern Slovenia called Cerknica. After long days of work on the farm, he and his friends had walked to this charming place for a beer in a local pub. Then they took two days off for some sightseeing and explored the famous caves of Postojna. Of course, I joined them online.

My son traveled to 16 countries in six months, and I saw them all. But then it was time for him to come home.

As we drove to LAX for his return flight, I realized how much I was going to miss my virtual adventure. We waited impatiently at the airport not sure what to expect. Then he rounded the corner from customs with his tired-looking backpack, worn-out shoes dangling from it, and a smile on his face that said it all. This time his hug was more confident and did not linger as long. I knew then this journey had changed him. He even looked taller! However, the biggest surprise was that I had changed, too.

Just as I have cherished every day being his mom and watching him grow up, I will forever cherish his passion for adventure and travel. Stalking my son through Eastern Europe brought me much joy and introspective. I thought I would feel guilty about being overprotective, but instead the opposite happened. As he took each step in his adventure away from me, I learned to let him go. So I owe my son a “debt” of gratitude. His “debits” led me on a journey of not only seeing the world but realizing that no matter where his travels may take him, he will always have a home in my heart.

P.S. After my son returned home, I confessed to my stalking and virtual adventure. Typical of his good nature, he thought it was funny and endearing. We were able to then share his travels all over again — this time together!

In addition to being a mother of two sons, NABBW member Debby Nicklas is vice president of Philanthropy at French Hospital Medical Center Foundation. She lives in San Luis Obispo with her husband, Steve.

This article was originally published in The Tribune, San Luis Obispo, California. You can see the original article here.