Sunday - February 5, 2023
Home » Member Articles » Personal Relationships » For My Mother’s Birthday an Ode to My Father

For My Mother’s Birthday an Ode to My Father

Today I brought two yellow roses to my father. Two days from now, my late mother would be turning 80. Yellow roses were “their” roses ever since their romance began in 1956. Mom lived just long enough to celebrate their 52nd anniversary before succumbing to cancer in the fall of 2009, one year and a day from her terminal diagnosis.

The flower shop is less than a mile away from my dad’s house. While driving the short distance, en route to one of my more or less weekly “lunch and laundry” dates with him, I realized I had started to cry. It still surprises me that the tears can come so quickly when I indulge memories of my mother and find myself yearning for her to not be gone.

I don’t often ask my father how much he yearns for her to be with him again. I’m reticent largely because I don’t want him to be sad. My mother’s dying wish – her instructions to him, I suppose – were “Don’t be sad.”

When I handed him the roses, he didn’t say “thank you”; instead he said, “I know.”

He has bought yellow flowers himself in the past. I remember being deeply moved when I discovered a big bouquet of yellow roses on his kitchen counter while visiting a few days after February 14, 2010. They were roses for Mom on her first Valentine’s Day without him. 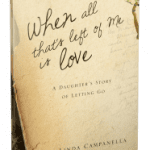 My parents’ love for each other was never more in evidence than during their love story’s final chapter. I’m often asked how my dad is doing, especially by people who’ve read my memoir of Mom’s final year and therefore experienced vicariously Dad’s wrenching heartache and anticipatory Grief. When asked, my response is – and the truth is – that he is doing really great. I desperately hope that wherever and in whatever form she is now, my mother bears witness to her sweetie pie’s strength and Resilience.

He’s become a much more social creature, which would surprise her. Soon after her death, eight or so of their cul-de-sac neighbors started a monthly get-together, with hosting duties rotating among them month to month. To my surprise, he accepted the invitation to attend the inaugural gathering.

Maybe he said yes because he knew how much my mother would have loved this kind of thing. (And it’s quite possible he would have sent her off without him if they’d been invited as a couple!) I went to visit him that afternoon and prepared an appetizer for him to bring.

Though long past Retirement age, he’s still working on average three days a week as a radiologist. In April, I took care of his dog for five days so he could take a course at Harvard and earn continuing ed credits.

Last month, he renewed his medical license for another two years. He is much in demand by the radiology department he chaired in his younger days, highly esteemed by his physician colleagues and the young residents whom he teaches, and genuinely loved by the technicians who work with and occasionally flirt with him. He’s always been a real charmer.

He arrives well before 6AM to get a jump on reading films left from the prior day. Two weeks ago, he turned 83 on what happened to be a scheduled work day for him.

Since I thought it was a big deal to be turning 83, I called the radiology department mid-morning, just to give folks a heads-up in the hope they might wish Dad a happy birthday. I hated to imagine no one would acknowledge his special day.

“Honey, we are way ahead of you!” was the surprising response. Apparently he was welcomed that morning with balloons, posters, pastry, and a string of requests from female colleagues wanting to be photographed with him. The tech on the phone told me that each time he accommodated a request to pose for a photo, he said to the woman next to him, “Be careful; Nan is watching!”

“Nan is so happy you have all of us to love you!” was the rejoinder. How perfect – and perfectly true! My siblings and I also are so happy about this. We believe work has given our dad a reason – and the courage – to keep living. And we know the sense of being needed and also loved has been balm for a heart broken when the person who needed and loved him most left him alone.

I marvel at many things about him, including his stamina and legendary work ethic, but most of all I marvel at my father’s mind. While my own gives hints of growing dimmer as I grow older, his mind seems sharper than ever. English is his second language, yet I venture to guess that his vocabulary is exponentially larger and his grammar far better than 99.5% of Americans’.

Don’t challenge him to Scrabble, Boggle, or any other word game and expect to win! With a steel trap for a memory, he has an especially uncanny ability to remember details of history, and he can correctly identify just about any piece of classical music after hearing only the first few measures played; then he’ll recite the life story of the composer and provide a brief lesson in the history of the period or place in which he lived.

Last month I took a three-hour trip with Dad to visit my sister in New Jersey, and because he has never been a conversationalist, I decided to break the silence and pass some time by playing an old car game; “Let’s pick a letter and name all the places that start with it,” I suggested. He jumped at the challenge, of course expecting to destroy me. We started with “A.” As we progressed through the alphabet, I managed to keep up with him pretty well, but I failed miserably when he digressed occasionally to ask me a question related to a place one of us had just named.

We spent a lot of time on the letter “D,” I recall. “What do you mean you don’t know what happened in the Dardanelles?” he asked in disbelief. (I had already confessed to not even knowing where the hell the Dardanelles are located on a map!) An urgent geography lesson evolved quickly into a riveting history lesson about the Ottoman Empire, the Gallipoli campaign and World War I. And although I earned a point for naming Dunkirk while we were thinking of places beginning with “D,” I didn’t remember enough as I should have about the famous battle there, and another lesson replete with astounding detail ensued. By the time we got to “G” I was feeling both much smarter and totally humiliated by my relative ignorance. He, always a great teacher, was in his element.

I felt like one of the luckiest girls alive on that father-daughter trip to the Jersey Shore.

How lucky I am that my dad is still in my life and that his life is still so full. What a relief that his broken heart has mended, that his mind is still so brilliant, and that his body remains so sound. He is a little more stooped over, his hair is a little thinner, and he eats too many frozen meals and not enough fruit; but other than that, he is doing just fine. Five years a widower, he is healthy and he is happy; he is needed and he is loved.

What better present could we possibly give my mother for her 80th birthday than that? 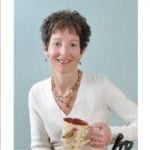 Linda Campanella is the author of a Nautilus Award-winning and life-affirming memoir about her joy-filled last year with her terminally ill mother. WHEN ALL THAT’S LEFT OF ME IS LOVE: A DAUGHTER’S STORY OF LETTING GO is about love and loss, family and faith, hope and hospice, grief and gratitude. Since her experience and her book’s publication, Campanella has become a passionate advocate for compassionate end-of-life care. More information about the author and her book can be found at www.campanellabooks.com

Tagged: : Linda CampanellaNABBWWhen All That’s Left of Me Is Love: A Daughter’s Story of Letting Gowww.lindacampanella.tateauthor.com