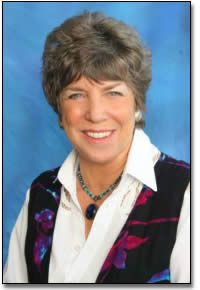 Spirits soared as I galloped through undulating fields of shimmering wheat beneath a brilliant sun in the highlands of the Northern Andes of Ecuador. The sound of my steady mount’s hoofs upon the grassy lane and the brisk wind cooling my cheeks were all I thought of as I followed Sally Vergette’s lead across the top of the world. Far below, the villages resting in the Otavalo Valley surrounding platinum Pablo Lake looked like tinker toy towns from the lofty vantage of the condor. 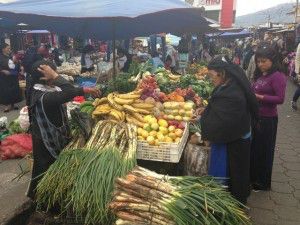 This romp with a band of nine merry women began in Quito, the gateway to outdoor adventures in Ecuador. It is good to take a day to adjust to the altitude (9,300 ft.) and rest before joining Sally on the ride between restored 17th century Colonial haciendas that climaxes on the wild slopes of Cotapaxi (19,350 ft.) volcano. While in Quito, I arranged for a guide to explore Old Town, a recently restored UNESCO world heritage site, and to take the cable car up to 13,000 feet overlooking the expanse of Ecuador’s second largest city nestled between towering snow-capped volcanoes.

Sally picked me up at the Hotel Sierra Madre, a comfortable safe haven with a helpful English-speaking staff near the new town center. The first stop on the journey with Sally is the Otavalo Valley, one of the last strongholds for indigenous people who share their wares in the largest outdoor marketplace in South America.

The scent of roasting pig and exotic spices floats on the air. Colorful ponchos and scarves of the villagers famous for their weaving lift on a light breeze like flags. I purchased hand-carved gourds at bargain prices as gifts to take home.

Our first night was spent at Hacienda Pinsaqui, a gracious oasis with all the trappings of the Spanish aristocracy who ruled here with an iron fist for 300 years (1542 to 1822). Delightful gardens surround the haciendas that are decorated with massive carved wood furnishings and murals and tapestries reminiscent of glamorous days gone by. After a dinner of local specialties, a serenade beside a warming fire by Andean musicians, and an early turn-in, I was ready to ride. 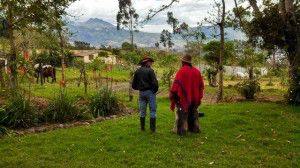 We trotted in the crisp morning air on cobblestone streets through villages. Shouts of ”hola” came from smiling children waving to us from rooftops of adobe abodes. Once upon the flanks of the mountains overlooking the valley we were greeted by Santiago, dressed in a royal red poncho and riding his prized pony.

He led us to his modest Tuscan-yellow home where his wife awaited us with tasty treats from their garden. He then took us on a ride even higher through billowing grasses to the primary forest above his ranch. Riding through a tunnel of mountain bamboo listening to the clip of dive-bombing hummers gave me a sense of what it was like here before hundreds of years of cultivation changed the look of the arid landscape.

Today the flanks of the volcanoes, held sacred to the Incas who ruled here for 100 years before the Spanish conquest, are a colorful tapestry of purple, gold, and green plots. Mama Cotacachi reigns to the west of Otavalo Valley while Taita Imbabura dominates the east. Incas sacrificed maidens to the mountain gods to bring rain and keep the valley fertile. Today, a few drops of trago, a fierce liquor, sprinkled on the ground will do.  We passed cattle, pigs, and goats staked to graze along the trails that locals traverse daily to tend their crops on tiny inherited plots.

In this peaceful place where people still live close to the land with all members of the family lending a helping hand, one wonders who is the happier: villagers stuck in time or city folk living with the pressures of modern urban life. I pondered these thoughts as I lay on my poncho spread in the sun waiting for the picnic lunch Sally laid before us. 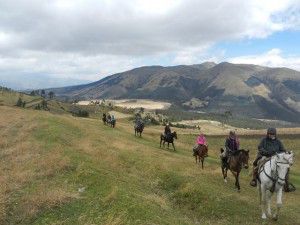 Back in the saddle, we cantered along the ancient Inca trade routes with vistas stretching to eternity. While descending on a narrow track into the less-traveled Zuleta Valley, the sky darkened. A mist hit us and a few drops fell on my cheeks. Instead of the threatened downpour, the sun burst through the gray curtain sending shafts of light upon the golden fields and a broad-banded rainbow arced over the valley.

At the end of this glorious day, we entered the gates of Rancho La Merced where prize-winning Andalusian horses stood munching on knee-high grass and we settled into a cozy evening by the fire. By now, we nine equestrienne were friends sharing stories of rides before and rides to come. I would leave the group the next day and they would continue on to the second leg for advanced riders on the flank of Cotapaxi.

The Colonial hacienda ride is for intermediate riders who can handle mounts at all gaits, but Sally has more relaxed, shorter rides on horses suitable for children and inexperienced riders in the same region. She keeps a constant vigil on her rides, checking tack often and making sure that horse and rider is a good match.

After twenty years in South America, Sally learned the language, the ways of the people, and earned the respect of local horsemen who also act as guides. This is a rare and wonderful way to explore Ecuador; it gets you into the countryside and gives you a chance to meet the people who call it home.

To learn more about Sally Vergette and the rides she offers in Ecuador, Chili, Brazil, and Uruguay please refer to our interview in my September post and go to RideAndes.com.