According to a Home Shopping Network pitchwoman (whom I only saw accidentally when one of my dogs rolled over on the remote and changed from the highfalutin PBS pledge drive I was watching), “Comfortable shoes are back!”

Can I get a low five?

Of course, the spokesperson was talking to women because most men are too smart to ever stick their tootsies in a six-inch stiletto heel with a toebox meant for a hamster’s foot, not a human’s.

Given the choice between painful footwear and, say, getting their chests waxed, guys will just head to the kitchen and grab a beer.

But now, apparently the gods of foot Fashion have decided that we women can slip on our Crocs, our sneakers, and our Dansko clogs, kick up our not-so-swollen feet and relax with a brewsky too. 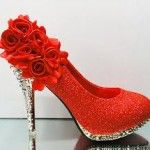 Somehow, I don’t think it’s going to be that easy.

After all, the Sex and the City girls spent seven years and two full-length movies trying to convince women everywhere that when having to choose between paying the rent and buying a pair of heels that can only be worn while sitting on a memory foam bed and chewing on an Oxycontin, the clear choice is always the shoes. 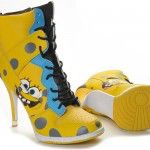 Perhaps what the HSN spokeswoman meant was that “average” women, women who don’t have to make an impression in the harsh spotlight, can start treating their feet better, but that any woman who is or aspires to be famous, rich, or a Kardashian must continue not only walking on training stilts, but must do so while freshly waxed down there and sporting a diamond engagement ring big enough to precariously shift her center of balance to the left so that she must expend all her energy not to simply walk around in circles like a drunken circus performer. 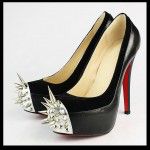 Dr. Oz has tried to convince women that really high heels not only cause foot problems such as bunions, shortening of the Achilles tendon, plantar fasciitis, and attracting random foot fetishists in the subway, but they also can cause knee, hip, and back problems.

However, if you’ve ever watched his female guest experts, even those recruited to talk about the evils of uncomfortable shoes, they always arrive teetering like a Flying Wallenda on a tightrope over the Grand Canyon, but with much more pained expressions on their faces.

Eventually, these women may remove their shoes and cradle their aching feet in their hands, but they feel that to be taken seriously as a woman, they cannot pad out on stage in ballet flats or bunny slippers. 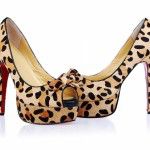 Comfortable shoes may be making a return engagement, but there are still commercials for online stores such as Shoedazzle that show hundreds of shoe choices—red, white, leopard print with pink zippers on the sides, studded, zebra-striped, green with goldfish in the heels—every night on TV.

All the candy-like shoe confections have heels that could easily serve as a weapon in a back alley street fight. Sneakers and flip flops and walking shoes seem to come in just a few boring color choices and never with live animal options.

Perhaps it all comes down to this: If you are the type of woman for whom it is important that your ass remain five to six inches higher than its usual location at all times except when you are lying down or repairing a spacecraft thousands of miles from the planet, and if you are also the type of woman for whom regular visits to podiatrists, orthopedic surgeons, acupuncturists, bunion removal specialists, toe waxers, mani-pedi providers, and primal scream therapists is affordable and part of your daily schedule, painful shoes it is. 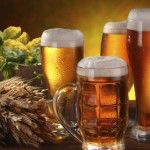 If, on the other hand, you are the type of woman who expects to be able to walk across a street without breaking an ankle, you now have more comfy choices.

Join me as we grab a beer together and take a load off.