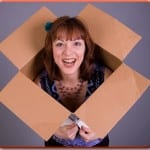 I’ll admit that I’m lousy at setting boundaries. Words come out of my mouth that in my mind make my desires or lack thereof clear, but what other people seem to hear is, “What you need to do is wheedle, and manipulate, and pressure me into changing my mind.”

And by other people, I mean mostly male people.

Wish-washy boundaries are why I ended up married to my last ex-husband, a man who proposed to me while he was in the bathtub! He could leave a ring around the tub, but I couldn’t draw a line in the sand. How sad is that?

My girlfriends all seem to understand that when I say something like , “I can’t be out after dark these days because my 16-year-old dog with Sundowner’s Syndrome gets freaked out and might have a seizure,” what I mean is “I don’t want to be out after dark because my dog is my family.”

Guys seem to hear, “I’d really like to come over and make you a sandwich, day or night.”

Case in point: I met a guy at a book signing event recently. We talked about writing and he asked me if I’d like to have coffee sometime. I assumed (wrongly, I now know) that he wanted to talk about writing with me, a writer–someone who could perhaps give him advice. I have these kinds of “meetings” all the time and am happy to share anything I know and learn new things. Hell, when you’re a writer, you’re always in search of new stories and stealing them from strangers is a great way to “do research.” 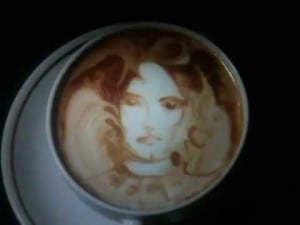 When this guy, let’s call him Kyle, sat down for our “meeting,” he immediately started talking about his ex-wife and then caught himself by saying, “Oh, I’m not supposed to talk about my ex, right?” Red flag, right?

Still I managed to convince myself that he was just telling a funny story to break the ice and that soon we’d be chatting about how he’d like to write a screenplay about his ex and wondered whether I had any advice about doing that without a lawsuit or bonfire on the front lawn.

But no… He told me about his kids. Then asked if I had any. It was then I finally wised up: He. Thought. This. Was. A. Date.

I mentioned that I was working on a novel. Talked about writing jokes for the internet. Looked at my watch several times in a very obvious Fashion. “Hey, Kyle, see, I’m looking at my watch. That’s a sign that I’m ready for this to be over.” I thought I was drawing a line. All he saw were flirtatious doodles.

Throughout our conversation, Kyle made it clear, he considered this to be the first of many “coffees and lunches.” I said I was really busy, that my schedule was unpredictable, that I could turn into a werewolf at any moment and he should flee if he valued his life.

He nodded and smiled and asked me why I hadn’t asked him any questions about his personal life. Because, Kyle, I’d rather have a Brazilian wax than give you any reason to think this might be a date.

I should mention, he was extremely loud. The woman at the table behind ours kept trying to move farther away. I wanted to get up and offer her my napkin to stuff in her ears.

Nothing phased him. Not my looking around the room at other customers and servers. Not my determining who owed what on the bill and paying my half as soon as the check came. Not my swift kick to the crotchal area. Okay, that last thing was just in my imagination. 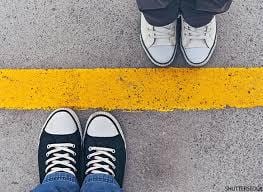 I said goodbye to him at the door of the restaurant and he followed me to my car. I threw out eight or nine clear “I have to go” statements, to which he said we “had to get together again so I could help raise his consciousness.”

I’m sorry, is that my job now? I don’t know him from Adam and not only does he expect me to go out with him again, I have an assignment! Oh lucky me.

Fortunately, I have a friend who is good with setting boundaries — at least for other people. She helped me compose an e-mail and took out all the words that could possibly be misinterpreted. She said I should practice ways to say no for the next time this happens. I told her the last time someone asked me to coffee, I had practically screamed, “What do you want from me?” at him and was trying to be a little kinder.

But I’ve taken her advice and have been making a list of phrases I can use that might keep people from pushing past my boundaries:

I’m hoping these help me out in the future. Feel free to use them if you need them.

Note: This article is reprinted with permission from Leigh Anne’s Accidental Comic blog, where it first appeared August 1, 2015.