Wednesday - February 1, 2023
Home » Expert Columns » In Which Leanne Explains How She Ended Up in a Field With 50 Other (Younger) Women, Muddy, Naked & (Somewhat) Unafraid

In Which Leanne Explains How She Ended Up in a Field With 50 Other (Younger) Women, Muddy, Naked & (Somewhat) Unafraid

When I signed up for a nude group photo with 100 women, I did so for a few reasons: the photographer is amazing; the women’s empowerment message of the shoot is something I care deeply about and at 57-1/2 years-old (yes, I count half years now), the chances of anyone asking me to pose naked would surely fall off soon.

I am not an exhibitionist. I’m okay with my body – I just look better with certain bits camouflaged by clothing, belts, scarves, mirrors, detour signs, tequila, etc.

I’ve never skinny dipped or flashed. I do occasionally walk around naked in my house, but usually just from the shower to the bedroom and I apologize to my wiener dogs if they seem scared.

Needless to say, the idea of my stripping down past my skivvies with a roomful of other women was a daunting challenge for me. I thought about backing out several times as the day loomed closer.

But as uncomfortable as I may be with my own nudity, I’m more uncomfortable with hypocrisy. To chicken out of a women’s empowerment event because I’m a too scared would just not do. I threw my shoulders back, sucked in my post-menopausal poochy belly and headed to the site of the event.

I arrived a few minutes early at the warehouse where we would all meet, strip, apply mud all over our bodies, and then walk approximately ¼ mile to an open field where the photo shoot would happen. (I arrive everywhere a few minutes early—be forewarned, those of you who end up planning my funeral.)

There were about 25 women there already, including one who was very pregnant. I let my tummy relax. The women were all dressed and there was an open bar of sorts. From the number of women drinking and standing in line for the one bathroom, clearly I wasn’t the only nervous one.

One of my former radio co-hosts was there, as was one of my closest friends, a woman who is much younger and in much better shape than I am and yet I invited her anyway. She posted on FB that it was about time she got a chance to see my boobs. 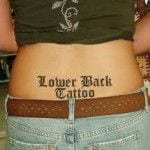 I recognized a few other faces in the crowd. One came up to me and told me she had taken grammar from me at the university. “And now you’re going to see me naked. And you’re going to know I have a tramp stamp,” I tittered. Everyone laughed. She said, “I knew you were cool.” And she did it grammatically correctly.

More women arrived, including one with a newborn baby. A few men were there too, photographers and friends/boyfriends/lovers/spouses of women. They were enlisted in stirring the tub and kiddy pool filled with red mud that we would soon be coating our bodies with outside the warehouse in the middle of a Saturday afternoon like a poor-woman’s version of a spa treatment.

Finally the moment arrived and the disrobing began. Little by little the shirts, skirts, pants, bras, and panties came off of the 50 or so women who had made it past their nerves and into the door of the warehouse.

Many of us then wrapped back up in robes or towels as we stood in line for our mud armor. Slowly, everyone shed not only their clothes, but their inhibitions. There were beautiful bodies everywhere – skinny and pudgy, white and brown, young and not-so-young.

Watching the women before us help each other pour mud on themselves and rub in all over was awe-inspiring. Not only did we look tribal, but we felt like a tribe – of strong, carefree women ready to take back power from anyone who tries to control what we do with our own bodies. Our laughter moved from girlish giggles to deep throaty laughs of self-assured women. We are woman, hear us grunt and snort with laughter while playing in a kiddy pool of mud!

When it was my turn, two women I’d never met rubbed mud all over me. As a redhead, I’ve never had a real tan and this is the closest I’ve come. I caught the eye of the other gingers and we were all pleased to finally have a skin color that couldn’t reflect moonlight.

While we were mudding up, several men drove along the fence separating the warehouse parking lot from a nearby storage facility. They honked and did what men would do when confronted suddenly and unexpectedly with many, many naked women. I’m fairly certain a few imagined themselves in a menage-a-whatever 51 is in French, but it didn’t matter. What would have been uncomfortable and creepy on our own was all part of the fun because we were with our tribe.

Then began the long, barefooted walk down across a major street and down a side street, across from a chocolate store (very fitting and had I not been naked and muddy, I might have stopped in) and finally into a field. Let me reiterate: Except for a coating of red mud, we walked naked, en masse, stopping dozens of cars, seeing people leer and almost drive off the road. None of it mattered. We were a tribe. And despite the mud, many of our tribal tattoos were still visible. It was the first time my lower back butterfly flew free outside.

Once in the field, we laughed and kvetched about animal poop below and clouds overhead that threatened rain. When given the instruction, we ran like a pack of female wolves, then we walked back and did it again and again.

Someone took a vote and we discovered I was the oldest woman there. A cheer went up from the tribe. That alone, being cheered for being the eldest, is such a rare and amazing gift, I want to re-wrap it an give it to myself on every birthday.

After six takes, the photographer was happy with the results and we marched back, repeating our audacious hike, only this time, slightly less nervous and with slightly less mud (much had rubbed off while running across the field six times and brushing up against each other as we tried to stay close enough together for the photos). 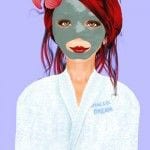 Back at the warehouse, some women showered under a cold hose. My friend hula hooped naked because how many opportunities do you get to do that?

I rubbed as much mud off as I could with my hands, put on my robe, said goodbye to my new clan and headed home. I was secretly hoping to get pulled over and have to explain my attire–muddy hair and nails and fluffy periwinkle house robe.

When I got home, the dogs thought the remaining mud tasted delicious.

I’m proud that I didn’t allow nerves, modesty, or an overactive bladder talk me out of this glorious experience. Who knows what’s next? Is there such thing as naked stand-up comedy?