“Hey, Red!”
There’s something about a redhead. I may be biased, having been born red-headed and kept up the “tradition” thanks to boxes of hair color with names such as Copper Penny, Awesome Auburn, and Hey, Who Started the Fire?

What can I say, I love redheads. My first dog Copper was a “ginger” as we’re often called these days. (By the way, ginger is also my favorite spice.) Three of my best friends have had fiery hair and dispositions, as did my favorite high school and college teachers. I wanted to be Julie Andrews in 1965 when The Sound of Music Came Out, I loved Lucy in reruns in high school, and in college I once fashioned a Halloween costume out of a kitchen rod and curtain in homage to Carol Burnett’s classic “Went with the Wind” sketch.

Needless to say, when I was invited to attend Carol Burnett’s recent Eugene show put on by The Shedd, I did my best Tarzan yell (at home to my dogs who don’t judge me because I’m the only one tall enough to get them cookies) and immediately accepted. When I found out I’d also get to meet one of my red-headed childhood icons, well, there may have been some drinking at an inappropriate hour of the day, but I’ll deny it if questioned. 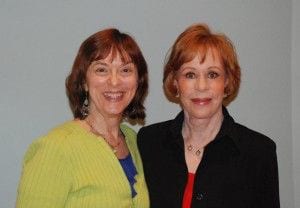 I am not celebrity-crazed. Generally, when people ask me who my favorite actor, comedian, athlete, etc., is, I’ll truthfully name someone I know personally. I don’t cyber-stalk stars nor do I make them my friends on Facebook. But there are a handful of people whose remarkable talent is underscored by compassion, honesty, and class, and Carol Burnett is one of those people to me.

And of course, there’s the hair color – which, by the way looked fantastic under the spotlight at the Hult Center. (That’s another reason I love redheads. We don’t shy away from the spotlight because it sets off our flaming coifs. We do, however, shy away from sunlight.)

There was something special about the type of comedy Carol represents(I know she would be okay with me using her first name because last night someone addressed her as Ms. Burnett and she responded with “Call me Carol.”) Hers was sketch comedy that wasn’t mean-spirited or snarky, that allowed everyone’s talents to shine, and in which it was clear everyone was having the time of her or his life.

It was playful and silly and took risks in ways that didn’t have to push boundaries of profanity or sex. I wish there was more of that in today’s comedy offerings. No, I’m not an old fuddy-duddy – I can and will laugh with harder-edged comedy, but I miss the kind of sheer joy that shone through every Saturday (and then Sunday) night from 1967 until 1978. Ellen DeGeneres and Jimmy Fallon are working hard to bring that kind of fun-loving comedy back.

Carol’s Eugene show was a night of questions and answers, just like what she did long ago on TV. I had three possible questions prepared. (1) What brand of hair color did she use and what shade? (2) Did she think Jerry Lewis was funny (this is in reference to the fact that Jerry has said more than once that he don’t think women make good comedians. But what does he know, his hair isn’t even red!)? and (3) In a society always looking for ways to prevent aging and look younger, did she think comedy was the fountain of youth? I had settled on questions #3 because at 81, Carol is still one hot tamale.

Unfortunately, I never got a chance to ask my question, but it didn’t matter. The evening was laughter-filled and warm-hearted. Carol’s stories were not only engaging, but the fact that she remembered so much at her age made me scratch “Get Gingko Biloba” onto my notepad while listening to her. Of course, I can’t remember where I put that list…

During the questions, I discovered that Carol and I had more in common than just fake hair color. We were both nerdy girls, spent time living in Texas (she was born in San Antonio), and found our comedy calling accidentally. She wanted to be a cartoonist and had to take a theater class in college, which changed her path. I wanted to be a politician and decided if I were going to lie and exaggerate all the time, I’d rather do it while being funny.

Backstage, I was introduced to her as “a local comedian and comedy writer.” Wow, what a rush. And then Carol laughed at something I said. I’m not going to say I can die happy now because I want to live happily for a long, long time, but it was a good night. And I will admit that I’m staring at the wooden drapery rod in my office wondering if I should wear it to the drugstore to buy hair dye.

I so glad we had this time together.