Saturday - August 13, 2022
Home » Expert Columns » Travel Columns » With Another Summer Upon Us, Linda Ballou Shares Stories of Rivers She Has Known and Loved

With Another Summer Upon Us, Linda Ballou Shares Stories of Rivers She Has Known and Loved 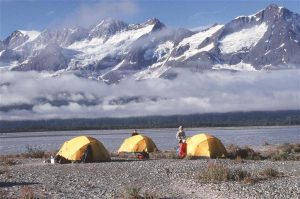 Camping tents glow beneath dramatic storm clouds on the edge of the Tatshinshini River in Alaska’s Yukon.

As temperatures begin to soar, I dream of the rivers I have known and loved. Tension mounts as I hear the rumble of rapids roiling ahead. Sitting up straight, tucking a foot beneath the pontoon of the rubber raft, taking a secure position for the white water to come, I listen for commands.

“Paddles ready!” calls the guide and then we are bouncing through rapids with cooling waves splashing overhead. Squeals of excitement fill the air as we paddle for all we are worth through the foaming rush.

Next we settle back to a smooth glide down the river as it flows to the sea. Then comes our laughter at having tricked the river gods once again. Oh, do I love the life-giving rivers I’ve run!  Each of them has a different flavor and offers a unique experience for those who need to get outdoors. 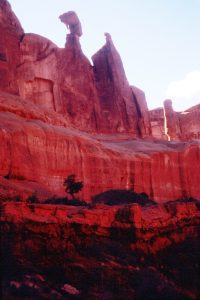 View of the Queen Nefertiti rock formation as the Green River flows through Utah’s Labyrinth Canyon.

The Green River flowing through the Labyrinth Canyon outside of Moab, Utah is a flat water run. The Green is ruddy colored from sediment run-off. The murky water did not entice me to swim, even though it was a pleasant 67 degrees.  The current was strong solid and swift in this so-called lazy river. Paddling a kayak for fifty miles on flat water gave me a chance to hone my river skills.

A kayak is a good choice for this river because it is more maneuverable and easier to lift off of a sandbar than a cumbersome rubber raft.

Each bend in the river reveals another even more immense set of towering rock behemoths.  I saw a row of Pharaohs standing next to Nefertiti, with a regal lion lying at her side, gazing down on us with indifferent eyes.

A squaw and her stern chief husband, a rock formation called “The Lovers,” stand in relief from the rock. The ominous, foreboding faces look down on the mortals passing through their canyon.

They watched Major John Wesley Powell, the first to record explorations of the river, come through in 1869; Butch Cassidy and his gang herding stolen stock down narrow ledges in the 1900s; moon-shiners burying kegs of whiskey in the sand during prohibition, and the uranium boys blasting out roads in the ’50s. Unmoved, unshaken, uninterested in human struggles, they stand and watch the river carve its way through Earth’s time. 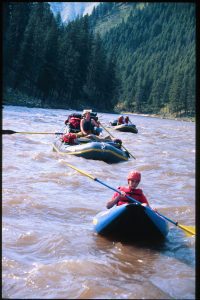 The Salmon River in Idaho on the other hand, is a burley river with much more swagger than the sleepy Green. It carves a path through some of the most remote, rugged terrain in the west. Mountain sheep watched our caravan of rubber rafts drift through their domain.

Our river safari consisted of three oar-boats loaded with camp supplies, one paddle boat manned by guests, a couple of two-person kayaks, and two solo kayaks called “duckies.”   My fellow adventurers ranged in age from 14-84.

Ben and Alex, teens with considerable canoeing experience, bobbed behind us in the “duckies” through waves that often took them out of sight. 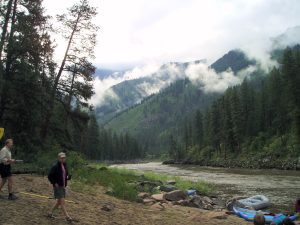 The Salmon River in Idaho is the longest free-flowing river in the lower forty-eight. It snakes its way 400 miles through the 2.2 million acre Frank Church Wilderness of No Return, forming our nation’s second deepest canyon.

In 1805 Lewis and Clark declared the river with its steep granite walls and foaming rapids “unrunnable.”

Today it is a favorite destination for sport fisherman and hunters who fly into remote lodges and as well as for whitewater rafters, who camp on sandy beaches nestled at the base of jagged spires shooting skyward. 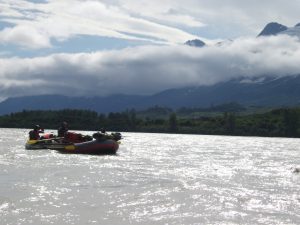 Rafting the wild, glaciated Tatshenshini (‘Tat’) River with our Chilkat Guides is more than a classic Alaskan wilderness experience, it’s soul cleansing — and some say it is pure fantasy, like something from a Jack London novel.

My most transformative river experience was on the wild and wooly Tatshenshini, with Chilkat Guides.The 125-mile run from the Yukon to the Gulf of Alaska, through glacier fields and untrammeled wilderness, with the crystal towers of the Fairweather Range as a backdrop is a soul-cleansing journey.

The Tatshenshini is a powerful, shape-shifting torrent that begins in the drier altitudes of Chilkat Summit at 3,400 feet and drops to sea level, where it cuts through the largest non-polar ice field on earth. Twenty glaciers muscle their way through the mountains to meet the water’s edge.

The “Tat” provides a wildlife corridor large enough to accommodate our greatest predator: the grizzly. The salmon-choked waters of North America’s longest free-flowing river provide sustenance for a myriad of mammals and 128 species of birds, including the bald eagle.

I believe the ancient voice of Raven called me here so that I might know my roots in the wild and come to understand the power that the north-country has over me.  I entered the river a happy-go-lucky adventurer and came out an environmentalist. 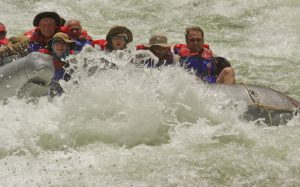 Rafting the Colorado’s rapids at the Grand Canyon is a life altering experience.

Finally, river guides who have done them all will tell you the Grand Canyon float is the granddaddy of all the rivers. “You don’t go down the river through millions of years of geologic time and come out at the end of your glide the same person.”

I met the challenge of rafting the tumultuous Colorado River on a motorized launch that gets through hairy rapids and down the entire 227-mile run in only eight days. This trip is perfect for people with time constraints who want to experience the thrill of the canyon without straining a muscle or risking an unwanted dip in bone-chilling water. 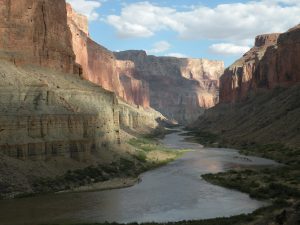 The Nankoweap Trail is an unmaintained hiking trail on the North Rim of Arizona’s Grand Canyon National Park. It descends 6,040 feet to the Colorado River.

We rocked and rolled down the narrow canyon hemmed in by columns of schist marbled with veins of red granite and white quartz.

I liked “Adrenaline Alley,” riding on the pontoons where I could hold on tight with one hand and lift the other to the heavens for the “bucking bronco” effect.

The reticent moved to high and dry first class, otherwise known as the “chicken coop,” while the hearty headed for the bow where they could face their future and yell “Bring it on!” Grand Canyon Expeditions has been running the river since 1964. You can’t be in better hands on the river.

These are just a few of the rivers that have filled me with excitement and wonder. Water keeps us alive. Let’s work together to save our rivers and keep our planet green.

Linda Ballou is an adventure travel writer with a host of travel articles on her site www.LostAngelAdventures.com. You will also find information about her travel memoir, Lost Angel Walkabout-One Traveler’s Tales from Alaska to New Zealand, and Lost Lost  where she shares her  favorite  hikes and day trips on the coast of California.

Linda's mission is to experience as many beautiful places on our planet as she can before they are no more. Travel tales relating her experiences while kayaking, horseback riding, sailing, birding and hiking about the globe have appeared in numerous national magazines. She had great fun collecting travel stories, and profiles of people she met in “naturally high places” for her book, Lost Angel Walkabout-One Traveler’s Tales. Go to LostAngelAdventures.com for more adventures.
See More Articles From Linda Ballou
Tagged: "Tat"Adventure TravelAlaskaChilkat GuidesColoradoColorado RiverFrank Church Wilderness of No ReturnGrand CanyonGrand Canyon ExpeditionsGreen RiverIdahoLabyrinth CanyonLinda BallouLost Angel in ParadiseLost Angel Walkabout-One Traveler’s Tales from Alaska to New ZealandSalmon RiverTatshenshini RiverUtahwww.LostAngelAdventures.comYukon River