Tale of Two Countries- Wilds of Zambia and Zimbabwe

Note: This is the last of  Linda’s series of three articles detailing the Ultimate Safari experience with Overseas Adventure Travel, aka OATS, in the countries of Botswana, Zimbabwe, and Zambia. She thanks photographer Tom Schwab for  the fantastic images accompanying her story are courtesy of Tom Schwab.

The journey to Zambia on Overseas Adventure Travel’s Ultimate Safari began with a ferry crossing over the Zambezi River where the four corners of Namibia, Zimbabwe, Zambia, and Botswana touch. 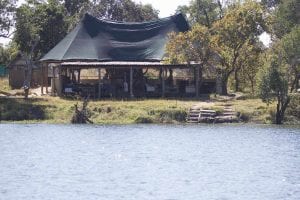 Our bush camp in Zambia, with luxury tent homes resting on the banks of the Lafupa River, was in the Kafue National Park. Dew-laden meadows of golden grasses glistened in the soft morning light on our first game drive in Kafue. The 5.5 million-acre fenceless park is one of the largest and most remote game preserves in Africa.

Nurtured by three rivers, this water-rich region boasts pristine wilderness thick with trees and foliage that makes it hard to spot game. Villagers who were ousted from the park in the ’60s continue to harvest bush meat, making game wary and hard to spot. Still, we came upon elephant shaking the branches of a tree for pods, a rank of impala, and a jackal on our night drive.

The high point at this camp was a day on the glassy river mirroring Waterberry trees that hugged the shoreline. Sun warmed our shoulders while the slow crawl of our boat upriver generated a mild breeze. We motored close to the shore stopping in a nest of enormous white water lilies to get a better view of the Jacana (slim birds known as lily trotters) that were walking on the floating plants. 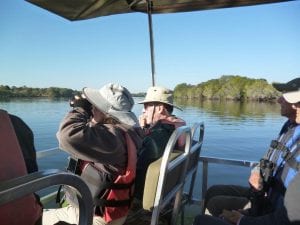 A Goliath heron poked for fish in the still waters. Wired-tail swallows dive-bombed us flitting in and out of the boat canopy as we passed through their territory. A handsome fish eagle gazed down upon us with orange eyes from his treetop post.

A brilliant blue kingfisher stood with his less striking mate guarding a hole in the mud wall where their brood hid safely from our prying binoculars. 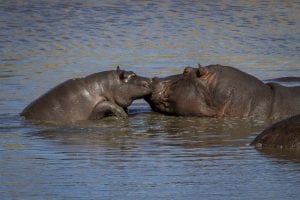 Bubbles told us hippos were submerged within feet of us. Round ears and flared nostrils were all that were visible on the surface. Hippos walk on the bottom of the river staying cool and relaxing all day until they broach the shore and graze all night.

Crocs sunning on the shore give birth to about 70 fingerlings and leave them to fend for themselves after about two weeks. They serve as food for a fantastic array of the birds: sacred ibis, the ubiquitous snake bird, open billed stork, gray crowned crane, and more. 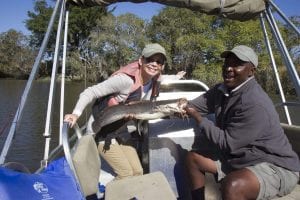 The fisher people in our group headed upstream in a faster boat and returned later with a bucket of tilapia and a 3-foot catfish to brag about. After our sundowner on the river, graced with a copper sunset over the Kafue and a sumptuous meal, we danced around a blazing fire to the beat of jungle drums with our hosts.

Birds chirped sweetly as I surveyed the valley below our camp perched high on a plateau overlooking a rugged landscape resulting from volcanic action millions of years ago. The yellowing mopane forest spread across the panorama as far as can be seen.

May is winter in Hwange, but it feels and looks like fall with its golden leaves and champagne-colored grasses.

On our morning drive we passed the usual flocks of Guinea fowl whose peacock colored heads are their sign that they have reached “self- esteem.” 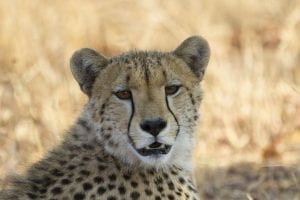 It was not long before we had a hallelujah moment as a bold cheetah casually strolled through a dry patch to a shady tree where he sprawled to rest. He rolled over and looked at us over his shoulder letting us see his tear drop markings clearly.

Around the next bend by the rhino boma, we ran into mating warthogs—a sight to behold! Black rhinos replanted here in Hwange are known to run themselves to death if care is not taken in their adjustment. The park closes at 6 p.m. with armed guards patrolling to protect against poachers.

Due to the lack of water in this landscape of sparse woodland and granite outcrops, man-made waterholes were introduced to sustain the animals through the dry season. 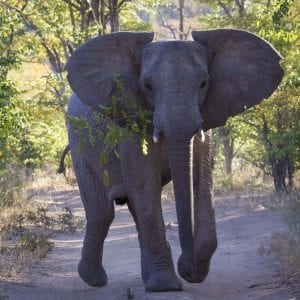 At Masuma Pans, the watering hole where we had lunch, all the players turned up. A parade of elephants sauntered in for a long draw at the trough, a dazzle of zebra, a pod of hippo lollygagged in the water snorting and making bubbles, a rank of impala chuffed a warning sensing a big cat nearby, a herd of kudus with two handsome males competing for action, a platoon of baboons, and a journey of giraffes came for the party.

This was a fitting finale to the all the game drives we had enjoyed on our 17-day Ultimate Safari from Botswana, to Zambia then Zimbabwe.

The muscular Zambezi River forms the boundary between Zimbabwe and Zambia. Both countries offer vast expanses of terrain dedicated to preserving wildlife, are blessed with abundant natural resources, but have starkly different realities for the people who live in them.

The leaders in Zambia did not engage in the land reform policies that removed many white farmers from estates they had nurtured for generations. Therefore, Zambia has recovered from declaring independence from English colonists in the ’60s more gracefully than Zimbabwe. Robert Mugabe, Zimbabwe’s ruler, enforced land reform in the 1980s, taking away farms from whites and giving the lands to tribal chiefs that supported him. The result of his heavy-handed policies is 70% unemployment. 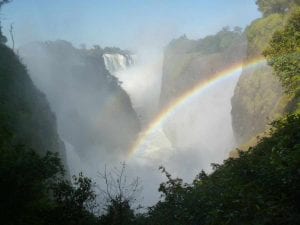 Our tour ended at Victoria Falls, a thundering plunge of water that churns and spins sending spray 1,500 feet into the air. The most spectacular view of “The Smoke that Thunders” is from a path through a tropical forest tracing the rim of the falls on the Zimbabwe side of the river.

However, access to Livingstone Island where David Livingstone first landed declaring the falls territory of his queen, Victoria, is on the Zambia side of the falls. There is a peaceful rivalry between the two countries vying for tourist dollars.

The mighty untamed Zambezi rules and no one can alter the natural boundaries it has carved between them. 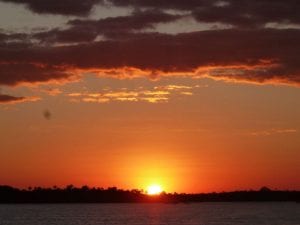 Our last night was spent on a sunset cruise above the falls where the river is about a half mile wide.

The magic and grace of this natural wonder reigns over the struggles of humans in the sister countries that contain the last of Africa’s truly wild places.

Linda Ballou says her mission is to experience as many beautiful places on our planet as she can, before they are no more. “Travel tales relating my experiences while kayaking, horseback riding, sailing, birding and hiking about the globe have appeared in numerous national magazines.

I had a great deal of fun collecting travel stories, and profiles of people I have met in “naturally high places” for my book, Lost Angel Walkabout-One Traveler’s Tales, while my latest book, The Cowgirl Who Jumped Over the Moon, deals with horses, World Cup racing, and the beauty of California’s High Sierras.

For a complete bio as well as published on-line clips with photos go to my website www.LindaBallouAuthor.com. Your reward, aside from learning about me and my work, will be to discover the secret to youth! Follow my blog or friend me on Facebook to keep up with my latest adventures.”

Linda's mission is to experience as many beautiful places on our planet as she can before they are no more. Travel tales relating her experiences while kayaking, horseback riding, sailing, birding and hiking about the globe have appeared in numerous national magazines. She had great fun collecting travel stories, and profiles of people she met in “naturally high places” for her book, Lost Angel Walkabout-One Traveler’s Tales. Go to LostAngelAdventures.com for more adventures.
See More Articles From Linda Ballou
Tagged: AfricaBotswanaDavid Livingstonegame preserveHwangeKafue National ParkLinda BallouLivingstone IslandMasuma PansNamibiaOATSOverseas Adventure TravelOverseas Adventure Travel’s Ultimate SafariVictoria FallsZambezi RiverZambiaZimbabwe