NOTE: My sojourn in South America began and ended in Buenos Aires where half the population of Argentina reside. Like most Americans, my knowledge of the geography of South America is a bit fuzzy. The journey took me to less-traveled parts of Argentina and Chile providing an overview of the landscape and high points I will be sharing in a series of pieces. This is the first: 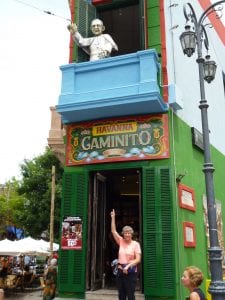 Church bells ring outside my window and remind me that Buenos Aires is a strongly Catholic town.

You may recall that Pope Francis is from Buenos Aires and and he often returns to speak at the Metropolitan Cathedral, considered the heart of the city—a city that is a frenetic beehive of activity.

You cross the busy boulevards with extreme caution because the constant flow of huge trucks, tourist busses, commuters in economy cars, and thousands of scooters bolting in and out will not stop. It is up to you to navigate streaming hordes of pedestrians on their way to who-knows-where in a hurry.

July 9, the six-lane motorway with tree-studded median and greenbelts, is so named because that date marks the day that Buenos Aires got its independence from Spain in 1816.

The 4 million people who live in the city proper are mostly Spanish with an Italian accent. The result is a devilishly handsome, passionate, animated population. In the turn of the century there was a program put forth by the government to encourage workers to come from Europe promising them land and a future.

Six million took advantage of this generous offer that turned out to be a false promise. Many stayed and made their way, but just as many returned to their homelands. The result is a cosmopolitan city with European architecture, a host of art galleries, and a thriving theater district. Porteños, as the people of Buenos Aires prefer to call themselves, are very proud of the Colon Opera House touted as possessing the best acoustics of any opera house in the world. 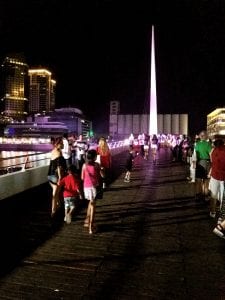 A stroll along the Rio Plata (River of Silver) on a balmy summer eve brings to mind a night in Paris. The lights strung on the yachts tied along the dock and atop the Women’s Bridge (Women’s Bridge is depicted at far right) reflect the many colors of the city in the river below. Young and old lovers stroll hand and hand while tango dancers and musicians add to the romance in the air. 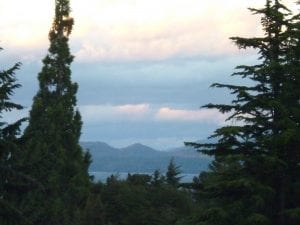 Bariloche, (see the view from my hotel window at near right) a two- hour flight away in the Lake District of Argentina, is where Porteños go for a respite from the city. In the early 1900s Perito Moreno, a geographer and naturalist, rode here with our very own Teddy Roosevelt. 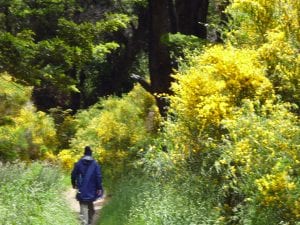 Founded in 1902, Baraloche was first populated by colonies of Swiss, Italian, and Germans. In an attempt to re-create the alpine resorts at home, they planted evergreen trees like Douglas fir, cypress, and flowering plants that love abundant rainfall. Today mounds of cheery yellow Scotch Broom (see photo at left) brighten the shoulder of the two-lane highway wrapping the immense lake. Meadows are infested with lupine. Swiss chalets are at home here and dark chocolate is the town’s claim to fame.

A chairlift to a ski hut provided a panoramic view of the Moreno and Nahuel Haupi lakes framed in mountains sheathed in green. We took a walk in an indigenous forest with our naturalist guide. There were few blooming plants with the Amazon fig-like tree predominant. This was followed by an energetic hike through a bouquet of introduced wildflowers to a vista of the fingers of the lake framed in snow-streaked mountains. 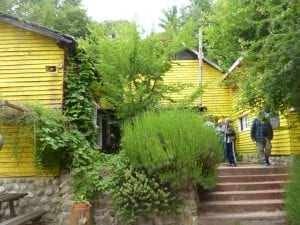 The early settlers had a penchant for beer. We visited a micro-brewery (yellow building at right) where a young man explained to us the detailed process of making his artisan beer. He uses water fresh from the nearby glaciers that form in the towering rock faces surrounding his valley. He goes to a valley surrounded by mountains protected from the fierce winds and stinging rains to get his hops.

His father owns the adjoining rustic restaurant with rough-hewn beam ceilings and hundreds of empty bottles framing the bar. The sun glistened on the leaves shiny from a recent rain while we enjoyed a warming lamb stew with a delicious squash soup for a starter and chocolate ice cream with a raspberry topping for dessert.

On the north shore of Nahel Haupi we took a lonely drive on a dirt road tracing a rushing creek to an Estancia where we were treated to a traditional asado, or BBQ, of beef, lamb, and sausages. Stunted shrubs spiked with flaming fire brush brought Wyoming to mind.

Plots of land 10,000 acres strong were given to early settlers, but today the land does not support families. Limits of 50 sheep per family have been placed upon them. Gauchos, like our American cowboys, are a vanishing breed. The land is being bought up by billionaires like Ted Turner who purchased thousands of acres of undeveloped land in the Patagonia steppe for a song.

However, there is a big sticking point that should be mentioned. This entire region was given to the indigenous Mapuche Indians by the Spanish who ruled until 1819. The Mapuche resisted subjugation and extermination policies by the Spanish for 350 years. They won many battles and the Spanish finally had to admit that the war with them was too costly in men and treasure and agreed to a land treaty with the Mapuche leaders. 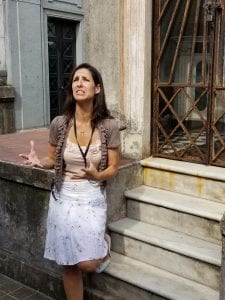 Sadly, for the Mapuche, the declaration of independence from Spain in 1819 voided that agreement. Today, they are struggling to obtain legal title to their lands, but are in competition with foreign investors.

(Note: In the angst-filled photo at right, an emotional local guide is actually telling Evita Peron’s story, but I like to think she would look the same were she sharing the wrenching Mapuche story.)

In closing let me share that a young Mapuche man protesting the loss of their land was killed the week before I arrived. The Mapuche are people of the earth with a respect for the harmony of nature and all living things.

It is mainly because of them this unspoiled region where a person’s spirits are uplifted by unending beauty is still there for us to enjoy. It is my hope that the Mapuche will be given safe haven. They are not asking for more.

Websites to know should you want to take my trip: