“We belong to the earth. It does not belong to us.” Aboriginal saying

Since time immemorial Tubowgule, the tidal island on which the Sydney Opera House stands, has been a place of gathering for Aboriginal peoples. The clans would meet there to dance, sing, feast, and share their stories. Today that piece of land that juts out into the Sydney Harbor is called Bennelong Point. On my tour of Australia, I noticed Bennelong’s name popping up everywhere making me curious about the importance of this man. 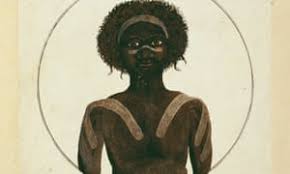 Woollarawarre Bennelong was a notable leader of the Wangal, a clan of the Eora people that lived in Manly, a long canoe paddle across Sydney Harbor. I took the fast ferry ride there from Sydney Cove to spend the day exploring the popular stop.

Manly Cove enjoys calm waters in the protected harbor, but a short walk across the isthmus lined with trendy shops takes you to the open sea. Surfers bob in and out of the remarkably warm rolling surf. Nearby, snorkelers ply the deep aquamarine waters where a reef provides shelter for a myriad of fishes. Much of  Manly is preserved with hiking trails leading to good viewing spots of the bay. I could see why the Aboriginal people were happy here. 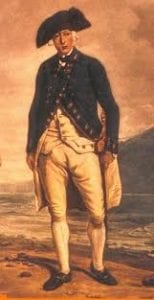 In 1788 Captain Arthur Phillip landed with the first fleet of convicts in Sydney Cove. He brought about 1,300 unfortunate men, 25 wives of these men, and 100 prostitutes to populate the colony. This filthy, hungry, sorry lot would be put to work building the colony.

Phillip was given orders from King George III to encourage good relations with the natives. Due to an accident in Brazil, Phillip was missing a front tooth. This started things out well. In the Eora tradition, a male child’s transition from boyhood to manhood is marked by knocking out a front tooth. They believed this bizarre pale spirit must be a brave warrior.

Following in the wake of many of the explorers like Captain James Cook, Phillip’s approach to good relations was to abduct a ruling chief to ensure civil obedience. In 1789 he sent his men to Manly where they captured Bennelong, a vital 25-year-old warrior. They tied and gagged him and took him back to the governor’s home where he was to become civilized.

Bennelong had a quick mind and was curious about the ways of the whites. He allowed them to dress him in their costumes. He could be seen strolling Sydney streets wearing frilly shirts with lace cuffs and a bright red jacket with brass emulates and tight britches. He learned English and became an ambassador of the native peoples sharing his knowledge of their culture with Phillip.

He soon became hated in both worlds. The Aboriginal people saw him as a traitor to their culture. They witnessed the drunken, violent newcomers spreading disease among their numbers. And the white convicts and indentured servants who were building the new city, eating rotting food, and wearing rags resented the black dandy strolling the streets enjoying the life of a lord. Bennelong, now in residence in the governor’s house, enjoyed society and earned the reputation as a pants man.

Bennelong was allowed to visit his people in Manly and invited Captain Phillip to a feast being held there. Phillip saw this as a perfect opportunity to reconcile with Bennelong’s people the fact that he had abducted their leader.

As he was talking to Bennelong, a warrior inserted a ritual spear into his back. This was not a deadly strike. It was a common response to an offense committed in the Aboriginal culture to be speared!

Phillip took this injury with amazing aplomb and did nothing to retaliate. Bennelong’s relationship with him improved. Emboldened, Bennelong requested Phillip build him a house on what became Bennelong’s Point and allow his wife, Barangaroo, to give birth to their child in the governor’s house. Phillip agreed to both conditions.

In 1792 Phillip’s health failed. He returned to England taking Bennelong with him. Bennelong was put on display in the court where he held his own, especially with the ladies. He made the rounds to the usual tourist attractions and enjoyed a gracious lifestyle in England. However, in 1795 the damp climate had damaged his lungs and he became homesick.

To the consternation of the English ruling the colony when he returned to Australia, Bennelong dropped his English manners. He went back to wearing a thong of kangaroo leather, painted his face, and let his full-blown hair grow. He paddled his canoe to Manly where he reconnected to the land and the ways of his people. He became a respected elder in his tribe. Sadly, he developed a penchant for rum and succumbed to drunken rages. It is reported he was given to beating his wives and anyone else who got in his way. When he died in 1813 his obituary in the Sydney Gazette did not read kindly:

“Of this veteran champion of the native tribe little favorable can be said. His voyage and benevolent treatment in Britain produced no change whatever in his manner and inclinations, which were naturally barbarous and ferocious.”

Race relations have been slow to improve in Australia. In 1957 landscape artist, Albert Namatjira, became the first Aboriginal man to have the right to vote and purchase property. Prior to that, Aboriginal people were considered fauna with no rights. Even today, it is against the law for Aboriginal people to drink alcohol in public in some parts of the country. 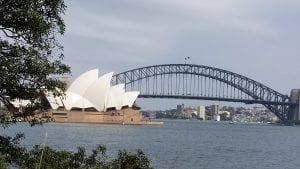 Today Aboriginals are viewed in a more charitable light.  Bennelong is hailed as a bridge between to the two cultures showing good humor and keen intellect. He was saddened by the horrific loss of life from smallpox and venereal disease the whites perpetrated on his people, yet he cooperated with the attempts of the English to “uplift” him.

As recently as 2018 Bennelong was given recognition for his role in the integration of the white and black people of Australia. The State Government spent $3 million to purchase the Putney home that contains the gravesite of Bennelong at Kissing Point in Sydney.