About twenty years ago, I followed Billy and Saxon, characters in Jack London’s novel The Valley of the Moon, on their journey in a buckboard wagon up the coast of California on their search for the perfect place to land. They put down roots in what is now the Jack London Historic Park in Glen Ellen. 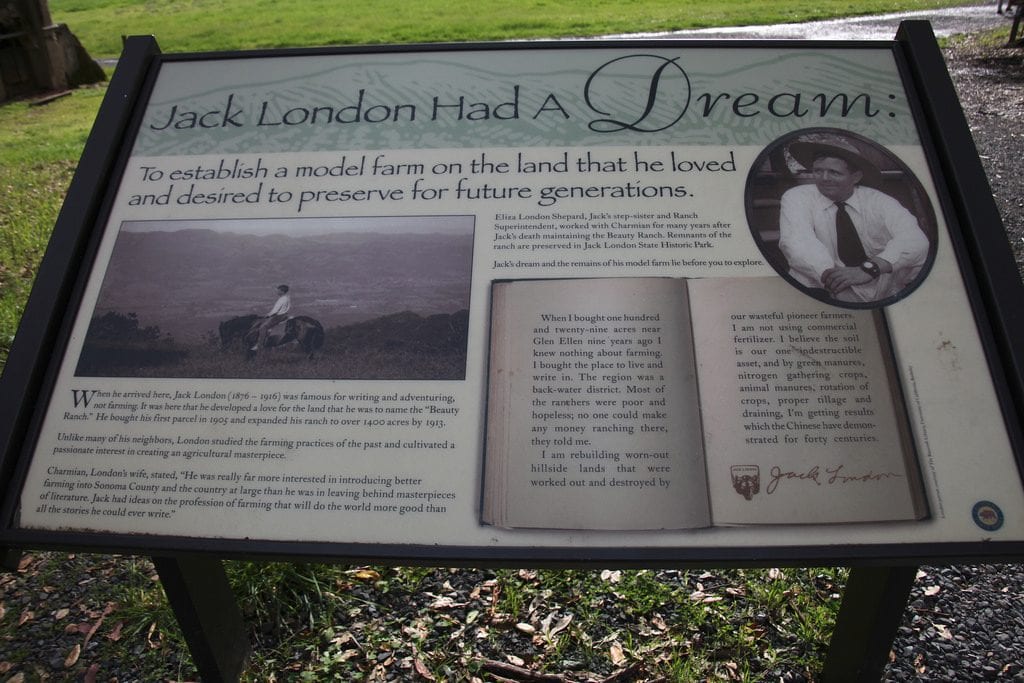 Jack purchased the land in 1905 and dubbed it his “Beauty Ranch.” In my essay Jack London and Me, I detail how my life and the master of adventure writing have intersected. I yearned to be closer to him and had to visit the haven he created and pay my respects to a man I admire and consider a kindred spirit.

At that time, there was a stable on the property and I rode horseback on the 20 miles veining 1,400 acres to the ridge of the Sonoma Mountains through old-growth redwoods and madrones to the lake Jack created by building a dam. 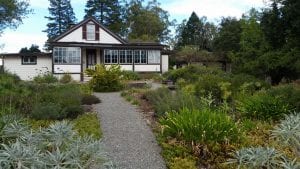 He, and his wife Charmian, rode through the forests on sun-dappled days to the lake where they swam and dried off in the sun. He also built a bath house for guests to change. He enjoyed lively conversation and good company at the end of the day. He welcomed people from all walks of life to enjoy his Beauty Ranch, from literary luminaries to an ex-convict he knew from hard times.

On a recent visit, one month before flames from the largest fire in California history scorched nearby vineyards and destroyed over 6,000 homes, I hiked the trail to the lake that is now choked with reeds and algae. I was told the state of California does not have the resources to repair the dam and maintain the lake. Still, the mist rising from the forest floor and the sunbeams streaming through towering trees on my early morning walk around the lake were magical.

Jack is best known for his writing, but he was also an agrarian visionary. He purchased the land for his ranch from six farmers who had gone bankrupt because they had “worked the land out.” Like many early farmers they stripped the land of nutrients and then moved on to destroy the next plot they landed on.

When he was a war correspondent in Korea in 1904, Jack learned how to retain moisture in the land by terracing. He studied farming and used green and animal manures, nitrogen-gathering cover crops, and rotated his crops to keep the soil alive. He gave two hours a day to his writing and ten to applying the most modern farming techniques to his ranch. Today, the rolling hills surrounding the structures on the property are planted with vines. 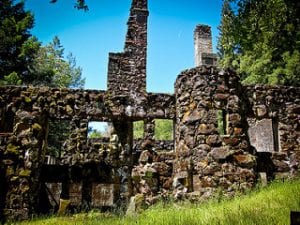 I was disturbed to learn that today the Beauty Ranch is now run and maintained by volunteers. The state does not allocate funds to keep the ranch operational. Volunteer docents open the humble cottage where Jack and Charmian lived from 1905 until he died in 1916.

The Wolf House, Jack’s other big dream that he poured all his treasure and vital energies into, was a massive four-story structure of redwood timbers on a stone foundation designed to last. Just two days before the London’s were to move in, it burned beyond repair under mysterious circumstances. Jack, a dedicated socialist and defender of the common man, made many political enemies, but we can only guess what or who started this devastating blaze.

I have returned to the Beauty Ranch many times. I receive inspiration strolling in the shade of stately oak woodlands and towering redwoods. I always learn more about Jack in the House of Happy Walls Museum that Charmian had built to ensure people would not forget Jack’s greatest vision—the Beauty Ranch he loved so well. I believe that “the secret to youth is to fill your mind with beauty.” I always feel rejuvenated when I walk the paths on the land Jack restored to vibrant life. 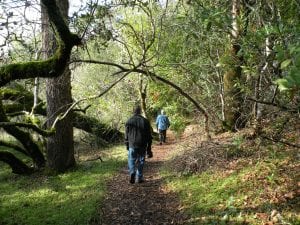 During the recent fire raging through the California wine country, docents rescued treasures Jack had gathered on his many exploits and his manuscripts in the cottage and the Happy House. For now, the Beauty Ranch remains for all of us to enjoy.

The day I was there in September, workers were building a platform for an event scheduled to raise funds to keep the Beauty Ranch open to the public. If you would like to visit, learn more about the Jack London State Historic Park, or simply make a contribution, go to www.jacklondonpark.com.

“The sunset fires, refracted from the cloud-driftage of the autumn sky, bathed the canyon with crimson, in which ruddy-limbed madronos and wine-wooded manzanitas burned and smoldered. The air was aromatic with laurel. Wild grapevines bridged the stream from tree to tree. Oaks of many sorts were veiled in lacy Spanish moss. Ferns and brakes grew lush beside the stream.

“Let me say it first,” Saxon begged. He waited, his eyes on her face as she gazed about her in rapture.

“We’ve found our valley,” she whispered. “Was that it?

Jack London-The Valley of the Moon

Note:  You can still ride in the park by making an appointment with Triple Creek Horse Outfit.