Glacier Bay: A Place You MUST Come and See 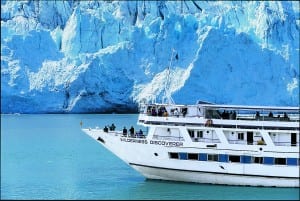 John Muir explored the fiords of Glacier Bay in 1879 in a sixty-foot, spruce canoe with a Tlingit Indian guide. I’m glad to be aboard The Spirit of Adventure, a 150- passenger catamaran with two glass-enclosed decks to roam, and an open deck on top for viewing.

Our Captain, a jaunty young woman with a ponytail down to her waist, is wearing a crisp naval white and blue uniform. The introduction to the cruise, given by the ship’s naturalist, a national park ranger, is interrupted by the sighting of a sow with two cubs. While I scan the shore with field glasses looking for the bears, a sea otter floats close by the boat showing off the kit she carries on her belly.

Surf scoters darken the sky as they lift in the thousands before the bow of the boat cutting through metallic water. Flocks of black oyster-catchers join them creating a fluttery curtain across the skies.

We cruise close to South Marble Island, home to the tufted and horned puffin. They work hard to fly, beating short wings in the air, but in the water they dive hundreds of feet effortlessly. Jaunty fellows in black tuxedos, they seem overdressed for the occasion. They share this tiny rock island with nesting kittiwake gulls, pigeon guillemot, and murres. Stellar sea lions, thousand-pound- mountains of flesh, hoist themselves onto the north tip of the island to roar at the day. The males are territorial bound during breeding season, while the females are free spirits that come and go at will. 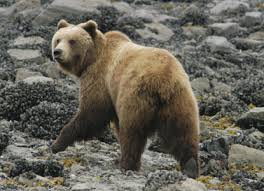 Mountain goats watch us from their rocky ledge. The cruise ships plying the fiords to the glacier snouts are their daily amusement. The lazy day brings a bear out to sleep in the sun beside a boulder. He lifts his head taking notice of us, and goes back to snoozing.

Though the sun is high overhead, the air temp is about 60, and the wind chill factor from the Moving boat puts it at about 40. Roxanne, a young woman from Ottawa, where it often gets 50 below, is in her element.

She spread her arms wide embracing the day “I feel invigorated fresh and alive.” she cries. I am warmed by her enthusiasm, but my teeth still chatter. I don’t want to leave the breezy viewing deck, so I hug myself and suppress thoughts about the fleece pants I left behind in a drawer in Southern California. 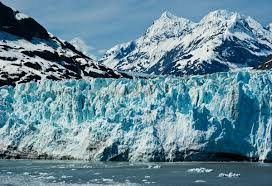 The ranger announces that we are entering John Hopkins Inlet the “jawbreaker “of the journey. We make a hard left turn to enter the womb of living time. The sheer rock walls jutting up on either side of the cove are scraped clean by the retreating glacier.

Our Captain slyly maneuvers through the bergs that create a chunky brew fanning two miles in front of the great ice river. I hear them crunching against our hull. The glacier is spawned in the Fairweather Range, a staggering fortress of jagged teeth reaching heights of 16,000 feet. The artist is still at work here, sculpting snow castles in lapis lazuli skies.

The spirits of the ancient Tlingits, who lived here 10,000 years ago, are released from their frozen tombs with an unearthly howl and claps of thunder when enormous chunks of ice calve from the glacier. It is a joyous bursting forth from the ice. Crystal creations shaped like birds, fish and men melt in the dazzling sun. The water broils beneath them until they dissipate into the milky green disappearing from sight into the still air. 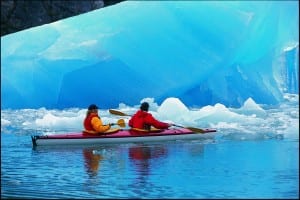 I spot two kayakers, brave souls, I consider to be part of the wildlife in Glacier Bay. They nose close to the foot of John Hopkins Glacier. If they should tip over and are unable to perform an “Eskimo Roll” successfully, they are guaranteed a heart attack within three minutes of hitting the water. They are close enough to the glacier to see the over 6000 harbor seals hauled out onto the icebergs.

Safe from Orca, the killer whale, the seals give birth to their young on floating fortresses. Newborns can swim almost immediately from birth. Disturbance of the bond between mother and pup in the first week or so after birth can lead to permanent abandonment of the pup. For this reason, John Hopkins Inlet is closed beyond Jaw Point to all boats from May 1 to June 30. 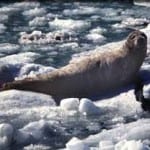 The boat has stopped so we may listen without the interference of engine noise. Guests crowded on the viewing deck include a couple from Holland, a folksy couple from Texas doing a video for RV enthusiasts, and two young men from Switzerland. I ask the men if the snow-drenched mountains beyond the glacier rival the beauty of the fabled Matterhorn. “There is no contest. The immenseness of the northwest overshadows the Alps.” They answer without hesitation. We hover in the inlet hoping for a calving of ice telling us we are in “The Bay of Thunder,” but, Mother Nature is not co-operating. I must rely on John Muir to describe the phenomenon. 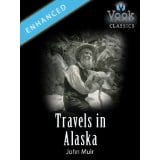 “Passengers were happy, gazing at the beautiful blue of the bergs and the shattered pinnacled crystal wall, awed by the thunder and commotion of the falling and rising icebergs, which ever and anon sent spray flying several hundred feet into the air and raised swells that set all the fleet of bergs in motion and roared up the beach, telling the story of the birth of every iceberg far and near.” Travels in Alaska, John Muir

On the return leg of the journey we cruise close to the face of the Marjorie Glacier. I see cerulean caverns glowing from the depths of the crystal columns jutting into the sky. The dripping from the glass castle melting in the warm sun sounds like a pipe organ playing an eerie tune. After soaking in the height, breadth, and depth of the kaleidoscopic face of the glacier we head back to the Glacier Bay Lodge.

Guests sharing the warming fire with me include; a pair of backpackers getting a mainline of protein in the form of a Berg Berger after a week of granola bars and freeze dried dinners; two young women planning to take advantage of kayaks for hire in Bartlett Cove the next day; and a couple from Redondo Beach, California in the middle of their quest for the perfect Retirement spot. It is September, the tale end of the season, the rangers are toasting one another goodbye.

Soon they will be departing, like the thousands of migratory birds that come here each year to nest, to warmer summer quarters. After a splendid version of seafood linguini prepared with the local clams, mussels crab, I turn in early and dream I’m gliding through jade green waters on the arcing back of a killer whale.

Glacier Bay National Park and Preserve located in Alaska’s Southeastern Panhandle, approximately 90- miles northwest of Juneau and may be reached by air or by sea. Glacier Bay Tours and Cruises, and Glacier Bay Lodge. http://www.visitglacierbay.com/

Linda Ballou says her mission is to experience as many beautiful places on our planet as she can, before they are no more. “Travel tales relating my experiences while kayaking, horseback riding, sailing, birding and hiking about the globe have appeared in numerous national magazines. I had a great deal of fun collecting travel stories, and profiles of people I have met in “naturally high places” for my newest book, Lost Angel Walkabout-One Traveler’s Tales. For a complete bio as well as published on-line clips with photos go to my website www.LindaBallouAuthor.com. Your reward, aside from learning about me and my work, will be to discover the secret to youth! Follow my blog or friend me on Facebook to keep up with my latest adventures.”

Linda's mission is to experience as many beautiful places on our planet as she can before they are no more. Travel tales relating her experiences while kayaking, horseback riding, sailing, birding and hiking about the globe have appeared in numerous national magazines. She had great fun collecting travel stories, and profiles of people she met in “naturally high places” for her book, Lost Angel Walkabout-One Traveler’s Tales. Go to LostAngelAdventures.com for more adventures.
See More Articles From Linda Ballou
Tagged: Adventure TravelAdventure Travel AssociateAlaskaGlacier BayGlacier Bay LodgeGlacier Bay National Park and PreserveGlacier Bay Tours and Cruiseshttp://www.visitglacierbay.com/John Hopkins GlacierJohn MuirLinda BallouLost Angel Walkabout-One Traveler’s TalesMarjorie GlacierNABBWSouth Marble IslandThe Spirit of AdventureTlingit IndianTravels in Alaskawww.LindaBallouAuthor.com