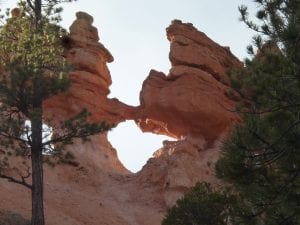 It seems everyone I know has been to Zion and Bryce Canyon National Parks in the Red Rock Country of Utah. It was high time for me to experience the soaring ramparts with majestic views, the splendor of sculptured slot canyons, and the magic of hoodoos millions of years in the making.

I chose mid-April for my visit to cash in on wildflowers, cool temps, and waterfalls that are fed by melting snowfields and dry up in the heat of summer. 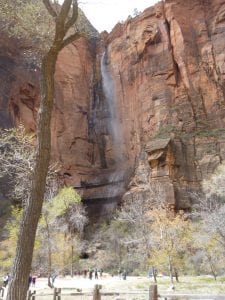 Zion and Bryce are located on the western edge of the Colorado Plateau in the four corners of Utah, Arizona, New Mexico, and Colorado. If the landscape seems familiar it is because Hollywood has had a love affair with the region for decades. Robert Redford called it “A place drawn by God’s own hand.” In addition to Butch Cassidy and the Sundance Kid, part of Electric Horseman and Jeramiah Johnson were filmed here, as were many others.

Springdale is the gateway to the park with an efficient shuttle system that drops off and picks up hikers at nine trailheads along the 9-mile canyon in a deep sandstone gorge. First stop is at the Visitor Center to get maps and updates on the trail conditions. Sadly, when I arrived, the majority of the intermediate hikes were closed due to heavy rainfall that caused rock slides. 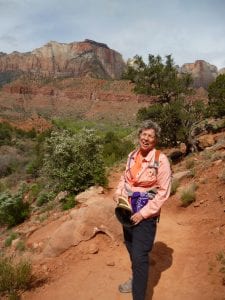 Linda on the Watchman Trail

I was able to hike The Watchman, a rock stairway switch-backing up a canyon flush with the white blooms of the serviceberry and sprinkled with vermillion desert paintbrush to a plateau overlooking Springdale. Happily, the Riverside Walk was open.

There, the Virgin River has carved the world’s tallest sandstone cliffs darkened with a waterfall that spills over a 7,000 foot precipice into a foamy pool on the canyon floor. The Narrows, a famous slot canyon that trekkers from the around the world come to explore, was closed. Angels Landing, a strenuous trek for daredevils with no fear of heights, was open. 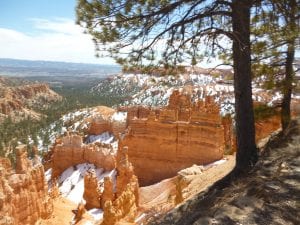 The only road in Zion Canyon was framed in cottonwood trees that were flush with chartreuse leaves and shot through with golden rays of a warming sun.  A stroll on the Grotto trail from the Angels Landing shuttle stop to the Zion Lodge where hikers enjoy a casual lunch can be enjoyed by anyone. An easy walk to Weeping Rock, a cave dripping with spring runoff, afforded a view of the canyon framed in towering ramparts is not to be missed.  It was hard to leave perfect hiking temps in the 60s and the intoxicating air, but the magic of Bryce’s hoodoos beckoned.

The next leg of my journey to Bryce Canyon was thwarted by Highway 9 (the Mt. Carmel Tunnel road), touted as one of the most scenic byways in America. It was closed due to damage from the heavy rains.

This forced me to do some backtracking to Highway14, a snaking road that winds upward to a breathtaking summit blanketed in snow. I could hear the ice crackling in the creek tracing the Scenic Byway as I climbed ever upward. This detour proved exciting and a less-traveled alternative to get to Bryce Canyon, but it is not for everyone. 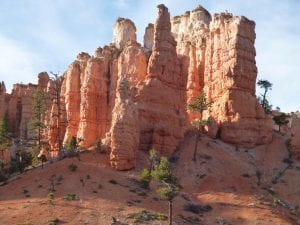 Bryce is famous for its hoodoos, colorful and exotic-shaped rock spires carved by wind and ice. It’s most famous formation “Thor’s Hammer” is located on the floor of the amphitheater which is the heart of the park. White drifts of snow in the clefts’ burnt-orange formations looked like frosting on a carrot cake. The walk along the rim with inspiring views is an easy stroll between Sunrise and Sunset Points. It can be a hike if you chose to go the entire length of the trail. 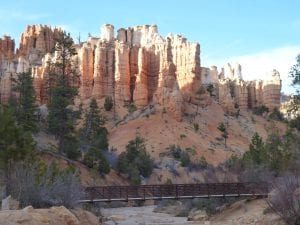 Due to heavy snow, the Queens Garden and Fairytale Loop were the only trails open to those who are hardy enough to descend to the valley floor. Going down is easy but returning to the rim can be stressful.

Sensitive to the altitude (8,000 ft.), I chose to take the easier option to Mossy Cave. The trailhead is located outside of the main park off Hwy 12. Tears of gratitude welled as I strolled at the base of the castles in the sky along an energetic river to a waterfall.

I was not denied the thrill of knowing the shady glens and walls laced in maidenhair ferns on the valley floor because of physical limitations. Even though millions flock to Zion and Bryce each year, I was able to find my quiet moments here with Mother Nature. I will return to explore more of some of the best of the Creator’s handiwork that has been preserved for all to enjoy.

Lodging: Ruby’s is the landmark establishment in Bryce offering food, lodging, horseback riding, and more. They are kind enough to allow people staying elsewhere to use their Olympic-sized pool and soothing spa for $5.00.

NOTE: The National Park staff is working feverishly to have the “tunnel road” from Zion to Bryce back up and running by April 30th, but if you are planning a trip to the region I suggest you wait until mid-May. Be sure to check road conditions of the alternate routes before going. There were closures due to late spring storms.

Linda's mission is to experience as many beautiful places on our planet as she can before they are no more. Travel tales relating her experiences while kayaking, horseback riding, sailing, birding and hiking about the globe have appeared in numerous national magazines. She had great fun collecting travel stories, and profiles of people she met in “naturally high places” for her book, Lost Angel Walkabout-One Traveler’s Tales. Go to LostAngelAdventures.com for more adventures.
See More Articles From Linda Ballou
Tagged: Angels LandingBryce Canyon National ParkFairytale Loophoodoohttps://www.rubysinn.com/Linda BallouLost Angel Walkabout-One Traveler’s TalesMt. Carmel Tunnel RoadNABBWQueen's GardenRuby's InnThe Watchmantunnel roadwww.LindaBallouAuthor.comwww.LindaBallouTalkingtoyou.comwww.LostAngelAdventures.comZion CanyonZion National Park