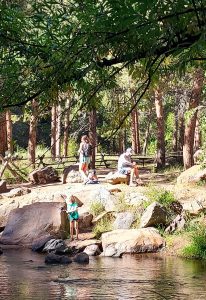 Fishing in Evergreen on Bear Creek.

Just 34 miles up sweeping I 70 from Denver lies Evergreen, a popular stop for folks wanting to breathe deeply of crisp, pine-scented air.  Forward-thinking Denver elders forged out huge open spaces for hikers and bikers in this area. A myriad of trail networks lace the hills surrounding the rustic mountain town.

I hiked in Dedisse Park on an undulating trail through a forest overlooking the Evergreen Lake. Expect to meet mountain bikers and other hikers on the trails.

Evergreen is a hub of outdoor fun and connecting highways to the interior of the Front Range.  Evergreen, along with neighboring Kittredge, Morrison and Golden, are all part of the scenic 40-mile Lariat Loop that should not be missed.

Just ten miles south is Conifer, a sleepy community with a network of less-traveled trails donated to the public by the owners of the Flying J Ranch. Before arriving at Conifer Historical Society for my talk about Isabella Bird, the woman who inspired my novel, Embrace of the Wild, I enjoyed some quiet time there. From Conifer, I traced Isabella’s hoof prints through the Front Range, where she rode 600-miles – solo – though the high country in the winter of 1873. 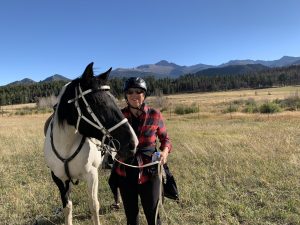 The day broke clear when I headed up Hwy 285, which was known as the Denver Stage Road back in Isabella’s day. It is now a sweeping highway that curls through forests of Ponderosa Pine with splotches of orange willows and lemon colored aspen on the left and the energetic North Fork of the South Platte River on the right.

If you are looking for an adventurous hike with staggering views, take the Colorado Trail at the summit of Kenosha Pass. Just around the bend is 75-mile wide South Park, once the summer hunting grounds of the Ute, Arapaho, Comanche, Kiowa and Cheyenne. 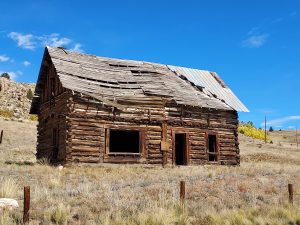 The remains of an early log cabin in Tarryall Valley.

In need of company in this lonely expanse Isabella followed a stranger who turned out to be Comanche Bill, a notorious Indian killer.  She shared the trail with him through Tarryall Valley where gold was discovered in 1859.

I followed their tracks through this rust-colored valley watered by a stealthy stream. Weathered cabins, likely built in her day, spoke of the hard times of the miners who rushed the valley in search of treasure. Bill directed her to Fairplay, my next stop.

Isabella rode an average of 25 miles a day stopping when she saw a light in the window of a cabin. Knocking on the doors of strangers to get out of the weather, she often slept with the children. 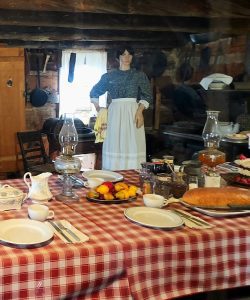 I settled into my cozy room at the Hand Hotel built in 1879 wondering how she could have managed that rough life.  Isabella spoke of ruffians and vigilante law in this stop in time. A recent lynching saw a man swinging on a tree nearby.

Today there is an outdoor western museum where you can wander among 43 structures built in the 1800s and relocated here at great expense. For ten bucks you may survey this South Park Museum for as long as you like.

On the way to trendy Breckenridge, I saw swaths of lemon-colored aspen carving a path through the deep green of the pine-sheathed peaks. This stretch on Highway 9 is a bit of a nail-biter with dizzying descents and tricky hairpin turns, but worth the butterflies.

I stopped for a leg stretcher on the charming river walk in Breckenridge. When rain drops started falling on my head, I pressed on toward Hwy 119, the glorious Peak to Peak Highway 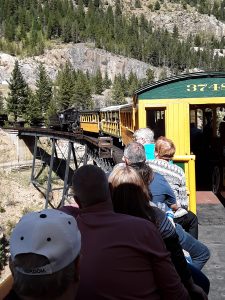 A stop at Georgetown, home to the most restored Victorian homes in the state, garnered a BBQ lunch to fortify me for the rest of the drive. The popular Georgetown Loop narrow gauge train that puffs its way through aspen, spruce trees and Ponderosa pines is an adventure anyone can enjoy.

Isabella came through here on her way to Green Lake. She was warned off making the climb but was undaunted. When she arrived at her ultimate destination after an arduous slog through snow drifts, the lake was frozen solid.

It is a short hop from Georgetown through Central City to the Peak to Peak Highway (aka Hwy 119 that turns into Hwy 7) that delivers you to Estes Park where Isabella began and ended her mountain tour. It is a spectacular cruise through some of Colorado’s most glorious scenery. 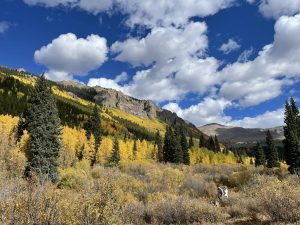 Fall color like this is why Linda writes of visiting “Falldorado.” Photo courtesy of Rich Grant.

Isabella averaged 25 miles a day on Birdie, her steadfast mare, to do her mountain tour in about a month. On especially horrible days, she would have to ride fifty miles to reach a cabin with a light in the window where she could stay the night. After seeing the vast expanses through some of our country’s most daunting landscapes, my admiration for this indomitable woman has only deepened along the way. 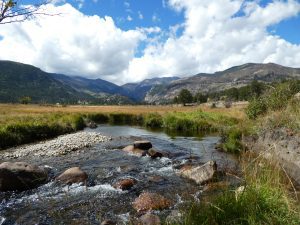 I agree with Isabella — the Front Range with dramatic descents, charging rivers, and austere granite peaks — is not to be missed, but that Estes Park remains the fairest. It is the gateway to the Rocky Mountain National Park (RMP), with miles of well-groomed trails to lakes and waterfalls for all to enjoy.

I was well-received at the Estes Park YMCA Library, where I shared a PowerPoint presentation about my mountain tour.

Later, steaming away in the spa at my lodge watching the aspen shimmy in wild wind, I felt gratified to know I was welcome here. As the trees swayed and clamored I drifted away imagining all of Colorado was giving me a standing ovation. 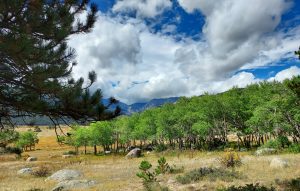 Isabella Bird is considered to be the Mother of the RMP because her powerful descriptions brought throngs of tourists and writers like me to know what she described so lovingly in letters to her sister Henrietta in 1873. Letters that became her book,  A Lady’s Life in the Rocky Mountains.