In the current issues of Fortune Magazine billionaires Warren Buffest, Bill Gales, and Melinda Gates ask the nation’s billionaires to pledge to give at least half their net worth to charity, in their lifetimes or at death. Such a noble idea could just be the catalyst to reverse decades of “the rich getting richer and the poor getting poorer,” to paraphrase a familiar tune.

Individual, corporate and foundation giving to charity in 2008, according to Giving USA, which tracks all contributions, was in the neighborhood of $307.65 billion dollars While many may consider this to be a handsome sum, it pales in comparison to the estimated $1.2 trillion, yes that is a (T) total net worth of the 400 individuals currently featured on the Forbes 400 richest people in the world list. Well, while the world waits to see how many people of wealth choose to get on the band wagon, let’s talk about you and me.

What can we do? Living in the shadow of a Warren Buffett who has already donated $1.8 billion to the $33.5 billion dollar Gates Foundation (the largest foundation in the world), it is easy for each of us to fall prey to a lingering mind-set, the myth that “I don’t have enough money to be a philanthropist” Many of the women first seek out my counsel at Institute for Women and Wealth burdened by the myth “There is no way I can make a difference.”

Both of these myths have little reality and no substance for the twenty-first century Boomer women. Every woman is a philanthropist when you consider the true meaning of the word the love of humankind.” If you have bought Girl Scout cookies, dropped money into the Salvation Army kettle, had a payroll deduction for the United Way or supported a “Save the Whales” or other cause dear to your heart, you are a philanthropist Yes, you are a philanthropist because you choose to give money to a cause you believe in. Whether you choose to donate $1 million to build a child care center or give $5 dollars to save a stray, Philanthropy is about keeping the energy and flow of money doing good work in society. It’s not how much you give but what you do with how much you have to give.

Let’s look briefly at the second myth: “There is no way I can make a difference.” Oh-have you ever volunteered? You make a difference if what you do makes someone’s life easier and you bring a smile or good feeling to someone else. Whether you travel 3,000 miles on a mission trip to Africa to help stamp out disease or three miles to deliver “Meals on Wheels,” your action makes a difference to those in need.

Ronda Stryker, one of the interviewees in our book Women, Wealth and Giving: The Virtuous Legacy of the Boom Generation sums the feelings of so many Boomers by saying, “ I feel like I have a voice for women who don’t have the power to speak. It seems like everyone has a voice, but not everyone has a box to stand on and speak. I feel maybe that’s what I’m doing, building that base to give someone a voice.”

What’s your voice? How are you speaking your philanthropy? How do you finish the statement: My passion is to make differences in my community by using my time, talent or money to ____.

‘Till next we meet, Carpe Diem from the Philanthropic Muse, Margaret May Damen. 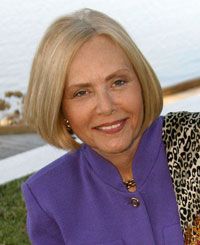 Margaret May Damen is a frequent keynote speaker and workshop leader on topics of money, wealth, and women's legacy. As a recognized thought-leader and change maker, she has presented papers at the national conferences of the Partnership for Philanthropic Planning, the International Association of Professional Fundraisers and the Association of Healthcare Philanthropic Professionals. Margaret is a member of the Sigma Alpha Iota National Music Fraternity and a classical flutist. She is co-author of “Women, Wealth and Giving: The Virtuous Legacy of the Boom Generation.”