Make Your Own Chrysanthemums – and Use Them Too!

Make Your Own Chrysanthemums – and Use Them Too!

The garden mum C. morifolium is one of the easiest perennials to grow and propagate.  It emerges in April or May and after a couple weeks it should be six inches high, with several pairs of lateral leaves. It\’s fully to half hardy, meaning that most varieties survive heavy frosts but some (like the ones used by florists) can only tolerate a little.

If you want to have some fun, you can take some of the longer cuttings and poke them directly into the soil.

I learned this one spring from a gardener on the campus of the University of Vermont in Burlington.  He told me how to grow new mums from these cuttings:  On campus they had potted up the cuttings in special soil medium in a greenhouse, which is the commercial way to do it.

I had no greenhouse and didn\’t want to fool around with root hormones, so I took my cuttings and put them directly into the ground.

By fall, each little cutting was a big, beautiful plant, and from then on I knew I could have as many mums as I wanted.  I also realized I could sneak a few that I admired — without harming them – making sure to keep them safe until getting home. 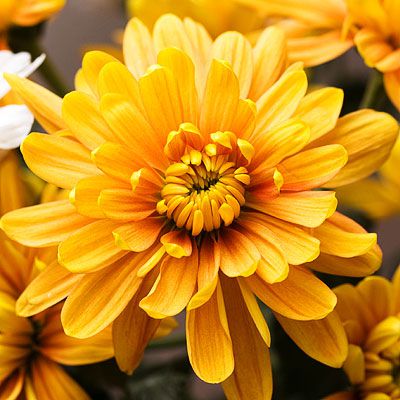 I have found that certain ones are easier to propagate this way:  The yellows and rust colors, and the Korean single kind or any color are much hardier than violet and white doubles. (I also prefer the Korean singles for their bloom and sturdiness.)

The best time to root the cuttings is on a misty morning no later than mid-June in most areas, and in semi-shade. Whether or not you want to try growing new flowers this way, you should keep pinching until mid-July.  But once you see buds forming, stop pinching or you won\’t have any flowers at all.

Another way to propagate chrysanthemums is to dig up the old plant in early spring and save the new growth that appears at the outer edges of the clump.  Discard the woody center — it will disappoint you by not flowering very well.

If you’re feeling energetic and the weather cooperates, you should divide the clumps each spring to restore their bloom, especially if they seemed to be petering out last season.  If the clumps don\’t pull apart easily, cut them into sections.  You can also divide in autumn, after flower.  Each cultivar blooms for three to four weeks, so if you carefully select cultivars, your mums can bloom August through frost.

To get the mum to branch and flower into a mound of color, pinch the stems back every month.  This will also make the main stem stronger and better able to hold up the flowers which can weigh so much that the plants keel over, especially when the flowers get wet. You should begin to pinch off or cut back the growing tips to encourage the mum to grow full.  Leave at least one pair of leaves on the original plant and cut maybe two or three inches. Mums are great as cut flowers whether bushy as I’m describing or long single-stemmed ones. If you prefer the latter in your flower arrangements, you should plan for those as well.

Chrysanthemums can be bothered by aphids and leaf miners.  One way to deal with aphids is to sprinkle soapy water on them, mixing up a gallon of water with a tablespoon or so or liquid detergent, being careful not to drench your plants.  If eelworms attack your mums, the plants should be destroyed.  The most common ailment is powdery mildew, which is white powdery spots on the leaves, which indicates that your plants are crowded and need more air circulation. They are easily moved, but be gentle as their branches are brittle where they join the main stem. It\’s best not to move them while they\’re in the late bud or flowering stage because you risk losing your fall display altogether.  Finally, put a three- to four-inch mulch on the chrysanthemum bed.

Some of the basic, available flower shapes of c. morifolium are:

Chrysanthemums belong to the daisy family, and shasta daisies (C. Maximum ) are a species of chrysanthemum.  How confusing.  Shasta daisies can provide you with big fresh bouquets through June and July. And if you cut off the dead flower heads along the way during this first cycle of flowering, you\’ll get another crop of flowers later on.  If you have plants growing in various intensities of sunlight, too, the ones in the shadier spots will bloom the latest.  So you can have blooms from June until frost, if you treat them right.

Shasta daisies are 2-4 foot tall, sturdy daisies with white petals and yellow centers, five inches in diameter.  They are the only perennial daisy — the others are biennials or self-sowing annuals. Shastas are very prolific.  You can divide clumps, or root the plantlets they send out often flowering.  Some varieties are susceptible to various fungal diseases, although new resistant varieties are being bred. Parents of the shasta daisy were probably from the Pyrenees and Portugal.  They were bred by Luther Burbank in Sebastopol, California using species including C. Maximum and C. Lacustre. 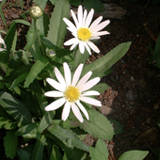 The perennial feverfew (C. Parthenium) is native to Southeast Europe and the Caucasus. It has tiny white flowers, about one-half to three-quarter inches across, with a yellow center.  It flowers through most of the summer, in sun or shade, and prefers average to poor soil.  Its leaves are light green, small, dense, ferny, and low and spreading.

There are two types of feverfew.  The single flowering type is known as a pest because it self-sows a bit too readily, so I\’m recommending the double-flowering type, which doesn\’t invade as much. C. Parthenium is called feverfew for a reason. It has been used as a carminative, emmenagogue, purgative, stimulant, tonic, to treat colic, flatulence, indigestion, colds, and the alcoholic d.t.s  Rub its leaves on your arms to keep the bugs away. It was found in almost every 17th Century garden.

If you plant seeds of feverfew in the spring, you\’ll get flowers by summer.

Did I mention that mums can serve as natural insect repellents in the garden? A natural pesticide is derived from their leaves – you’ve probably noticed the pungent aroma.

Deborah Clark says she might never have taken up gardening if she hadn’t had neighbors who shared their love of gardening with her – but moved away.

It all started in 1973, she says, when a departing neighbor invited her to take care of an already-planted community vegetable garden plot: all she had to do was weed and harvest. She was hooked.

Deborah Clark
Deborah Clark says she might never have taken up gardening if she hadn’t had neighbors who shared their love of gardening with her – but moved away. It all started in 1973, she says, when a departing neighbor invited her to take care of an already-planted community vegetable garden plot: all she had to do was weed and harvest. She was hooked. The following year, another departing neighbor left behind a copy of Rodale’s iconic book, “Organic Gardening” which gave her a solid basis in organic techniques.
See More Articles From Deborah Clark
Tagged: chrysanthemumDeborah Clarkfeverfewgarden mumGardening ExpertMake Your Own ChrysanthemumsNABBWshasta daisies