These days when we\’re more and more inundated with technology, we can lose touch with the natural world.

When I just think of all the computers I interact with on an average day – scanning groceries, pumping gas, text messaging on my cell phone, surfing the internet, answering email, driving my car, using Facetime on my iPad to connect with faraway family, punching phone buttons to get help with a bill, using the remote to watch TV, programming the dishwasher, turning on Roomba the robotic vacuum, getting cash from an ATM – the world is awry when the computers act up, and I have to turn to technicians specialized in whatever software or hardware is has a problem. 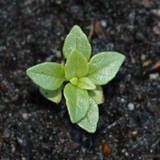 Happily, I\’m free of all these things when gardening. But gardening comes with its own set of problems. Gardeners become technicians of a sort, but our knowledge is based on observing and trying to understand the natural world.

Last year was the first year in a long time that I started vegetables from seed which I did because plants that meet my preferences as well as my yard\’s conditions are uncommon and rare in the myriad garden centers around here.

I used an old aluminum oven tray, filled it with compost and was off. The plants did well and had no problems at all. I had to toss that tray because it ripped, so this year I thought little peat pots connected together in 5 rows of 40 would be most efficient.

I could plant just 2 seeds in each one, and then separate the pots in the spring and plant them directly in the soil without having to transplant into any intermediary containers. I also bought some seed starter soil.

I planted the seeds during the last week of January, and they seeds sprouted in about two weeks. I also bought an unfamiliar seed starting soil that seemed to have been made so that water didn\’t soak directly into the soil which the inventors probably thought would keep the seeds from drowning.

As I watered, the soil remained dry on top, but underneath it may have been too much water. All this water may have encouraged the growth of something that looked like mold that appeared along the edges of the peat pots. The sad end of that episode is that only about 6 plants survived out of the 80 or so that I planted.

I ordered more seeds and went out and bought a plastic tray and some potting soil. The seeds arrived after a week or so, and I was able to plant them during the first days of March. I\’ve lost 5 weeks in a year that seems like will bring an early spring. My hope is that my little sprouts will be vigorous enough to make up for lost time.

Deborah Clark says she might never have taken up gardening if she hadn’t had neighbors who shared their love of gardening with her – but moved away. It all started in 1973, she says, when a departing neighbor invited her to take care of an already-planted community vegetable garden plot: all she had to do was weed and harvest. She was hooked.