Mostly people think of annuals for cutting because of their continuous bloom over a long period.  But carefully selected perennials can also be used. I especially like the appeal of a garden that keeps coming back and has interest through the seasons. Here\’s how one of my favorite perennial gardens came into being:

When the bulldozers plowed through the wild tangle at the back of this homeowner\’s lot, a dogwood, tall enough to provide mature beauty, was among the unexpected treasures. 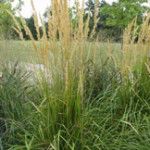 The mulberry tree, however, had to go.  Its shallow roots, messy berries and damp shade were elements the owners wished to eliminate.  When the mulberry was gone, there remained a kidney-shaped site about 20 by 23 feet in full sun for most of the day.  The homeowner wanted to keep the dogwood to act as a natural background fence at the plot\’s northern side.

When the homeowner saw what she had, she decided she wanted a cutting garden, but feared it couldn\’t be done with perennials.  The perennial garden we designed provides a variety of bloom through the season and yields cut flowers whose colors were selected to go with the indoor decor. 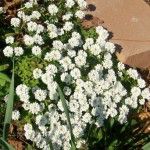 A paving stone path takes you through it, with spring-blooming blue-leaved pinks (dianthus Helen), candytuft (iberis), and fall-blooming liriope and New England aster (aster novi-belgii) at your ankles.

Creeping thyme between the stones lets out its pungent scent when stepped on.  The bloom time of these plants is staggered.  The path cuts the garden into two separate islands, with peonies on either side — early bloomers on the east and later pinks on the west. 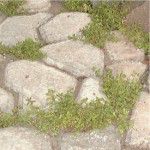 In the center of the west island, the erect feather reed grass (calamagrostis Karl Forster) provides an accent while not blocking the view of the plants beyond.  A tall purple-plumed maindenhair grass (miscanthus sinensis) is in the back of the garden, next to fall flowering white anemone japonica. There are evergreen and structural features throughout the garden, providing year-round interest.

In early spring as the narcissus are fading, the deep blue siberian iris looks like a piece of fallen sky. 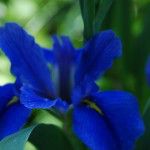 Its long reedy leaves contrast with the emerging deeply-cut leaves of the cinnamon fern, planted beneath the dogwood.  Also there in the shade is the majestic goatbeard (aruncus) whose creamy plumes appear in early June, as the iris is fading.

In the fall there’s korean chrysanthemum sedum autumn joy, with sprays of wispy switch grass (panicum). The particular palette here is whites, yellows, and pinks, with a few blues (gardeners call them blue, but they’re actually shades of purple) to match the dining room décor. 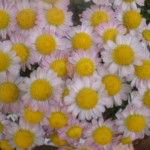 I’ve had a garden design business since 1989 and this was one of the earliest cutting gardens we designed. Perhaps today we’d design a different one because more plants are available now than they were then. But this particular plant list is one that will grow in a number of climates and includes perennials that are relatively worry free. 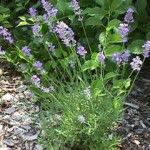 Deborah Clark says she might never have taken up gardening if she hadn’t had neighbors who shared their love of gardening with her – but moved away.

It all started in 1973, she says, when a departing neighbor invited her to take care of an already-planted community vegetable garden plot: all she had to do was weed and harvest. She was hooked.