Life is Not a Straight Line 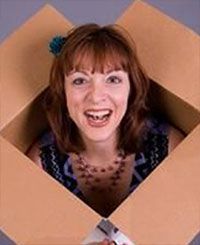 Someone once said that comedians wake up hoping something will go wrong so they will have something to write about. As someone who has written and performed comedy for sixteen years, I can truthfully say that if weren’t for my klutziness and bad luck, my career would have ended years ago. And my life would surely not have been as much fun.

When writing a joke, there are two parts – the set-up (the material that gives the information and context) and the punch line (the funny part). If you think about it geometrically (I know you want to), it looks like this:

Why, you may ask, am I telling you this? Because this is what life is too. Let’s just re-label the drawing:

The intersection between what we expect to happen and what actually happens is where most of us tend to get annoyed, frustrated, confused, embarrassed, angry, etc. But if we start to think like comedians, that intersection is where we could look for something funny.

Here’s an example from my own klutzy life: I had to drive from Eugene to Bend, Oregon – a 90-mile drive across the Cascade Mountains. Along the way there is a lot of forest, but not many public bathrooms. So when I had to heed the call of nature, I did so out in nature, up against a giant pine tree. When I got back in the car, there was an itching, uncomfortable sensation on my backside; I assumed I had scraped it on the tree. I didn’t have a full-length mirror in my trunk to check it out, so I continued to my drive into town.

Once there, I was scheduled to keynote a conference for a group of librarians. But first, there was a buffet, so I got in line and began chatting with some friendly library folk. When the line moved forward, I took a step and a giant piece of bark fell out of the back of my pants. We were all staring at it. I, however, was the only one who knew what it was (clearly, it was bark that fell off the tree during my outing). This is the point when most people would cringe in embarrassment and pray for the earth to swallow them whole. I’m simply looked up and said, “Now if I could just get the squirrel to come out of my underwear.”

Looking for the intersecting point between how we think our day is going and how it veers off unexpectedly and then choosing to replace our habitual negative response with laughter is one of the best ways I’ve found to reduce the stress of daily living. You simply make a choice to view everyday annoyances from a different angle. In other words, all it takes to live a happier, healthier life is your sense of humor and a little geometry.

Leigh Anne Jasheway, M.P.H. is a Stress Management and humor expert who helps women and men manage stress, embrace change, and become healthier by learning to lighten up. She speaks at 50-60 conferences and workshops every year and has been a national Speaking of Women\’s Health and Healthy Woman keynoter. She\’s a member of the Association for Applied and Therapeutic Humor (AATH)

Leigh Anne Jashaway-Bryant
Leigh Anne Jasheway is a comedy writer, comedian, humorous motivational speaker and wiener dog wrangler. She is the author of 25 published humor books, including Not Guilty by Reason of Menopause and Bedtime Stories for Dogs, and has been included in more than 2 dozen anthologies. In 2003 she won the Erma Bombeck humor award for her true story on how her mammogram caught on fire. When she’s not writing or making people laugh, she’s tossing a ball 7,000 times in a row for her dogs.
See More Articles From Leigh Anne Jashaway-Bryant
Tagged: Applied and Therapeutic HumorBaby Boomer WomenBaby Boomerscomedianshabitual negative responseHumorLeigh Anne Jashaway-BryantMaster of Public HealthMistress of Public HumorNABBWNational Association of Baby Boomer Womenpunch linewriting a joke